Getting his first major league win in two years, Greg Reynolds evened the series and kept the Reds within 3 1/2 of the division lead.

The Joe Nuxhall Memorial Honorary Star of the Game:

The Rockies picked Greg Reynolds second overall in the 2006 draft, ahead of luminaries such as Evan Longoria, Clayton Kershaw, Tim Lincecum, and Drew Stubbs. Reynolds battled through arm injuries and managed to give Colorado only 94 substandard innings. Tonight, he allowed 3 runs in eight innings, striking out 5 and walking none. He also stroked a double and scored a run. Easy call here.

Honorary mentions to Shin-Soo Choo, Brandon Phillips, and Ryan Ludwick, who each got 3 hits. BP finished a mere single shy of the cycle.

Fangraphs that should go in Greg Reynolds' den: 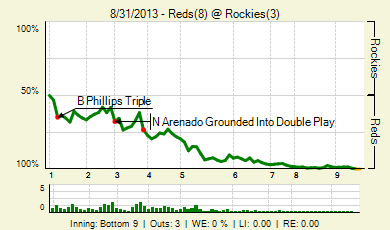