On the occasion of Aroldis Chapman batting

Share All sharing options for: On the occasion of Aroldis Chapman batting

Aroldis Chapman had kind of a weird night. Maybe it wasn't weird, per se, considering all the other things that have happened in his young life. And he was playing baseball in a baseball game, which can't have been unexpected. But it was memorable. Or, at least, notable.

For one thing, he pitched two innings for the first time this season. He hadn't pitched more than an even 1.0 yet. The last time he pitched a full two was May 12, 2012.

Also, he threw 35 pitches total- more than he's thrown all season and equalling last season's high. The most he's thrown in a major league game is 36, in an April 30th, 2011 near-disaster.

And he walked his first batters in August, breaking a BB-less streak dating back to July 29.

More notable than that - and you'll grant, a little bit weird - is that he came to the plate for the first time in his major league career. This - and Chapman pitching two innings - was mostly due to the fact that the bullpen was gassed from the previous night, though it could have been avoided with a double-switch (Chapman was due up third).

A quick tangent: This isn't a surprise, given how poorly the Reds seem to handle the DL, but I don't understand what sense it makes to run with a short bullpen on August 22. Cingrani probably needs to hit the DL, so you bring up a reliever. Greg Reynolds will have plenty of reinforcements if he makes a second start in early September. You could even send down Ondrusek or Hoover and creatively call them up early if you have to DL Cingrani. The most you'd miss them is until September 1...

...Wait, also: What are we doing with Jonathan Broxton here? He doesn't pitch for five days and then comes in AFTER JJ Hoover, who pitched the last two nights and was brought in with a four run lead. Then he faces two batters? He's injured isn't he? Just tell me if he is. 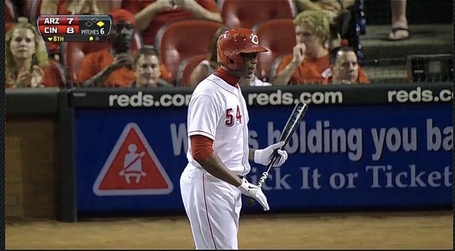 After Cozart reached on a base hit, the Buena-Wrista Crucial Sub was called on to bunt in a crucial situation in the bottom of the eighth. He came up to the plate all casual-like. Single-flap helmet. It might be worth mentioninghe'd made 11 very good plate appearances with the Louisville Bats in 2010: 4 H, 1 2B (.400/.455/.500). He made some kind of crack that made Will Nieves laugh: 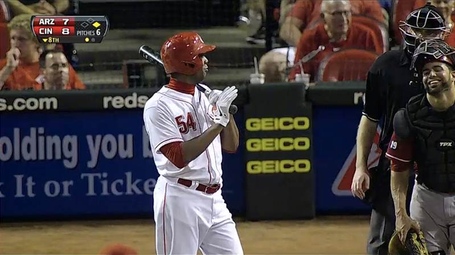 He has an open, hand-apart stance that didn't look completely uncomfortable, but mostly just anachronistic: 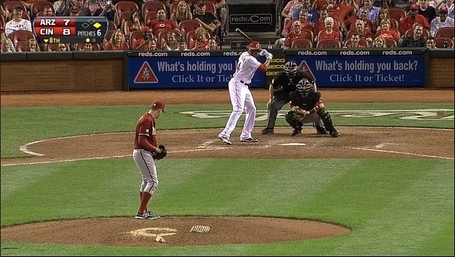 It was clear from the first pitch that Chapman probably didn't know how to bunt. Dusty gestured frantically - with obvious frustation  and almost to a little league level of animation. Possibly about how Chapman shouldn't be bailing out or someone should be doing something make things more normal.

He ran Ziegler to a 2-1 count and took a very game practice swing. For whatever reason, the bunt was off on 2-1 and Chapman took a huge cut. It's possible Dusty realized that bunting was completely futile. Or checked Chapman's minor league hitting stats real quick.

The count ran full and lot of fans were standing and grinning despite themselves. Mighty Chapman then struck out.

Most of the decisions in the last 3 innings of last night's game made little sense. Thank you for that.