On this day in Reds history, Frank Robinson had a big day in LA.

If you want to look at one of the reasons why pitchers throw so many fewer innings today than 60 years ago, look at the weakest hitters on the rosters. Johnny Temple hit zero home runs in 684 PA for the Redlegs that season. Richie Ashburn won the batting title, led the league in on-base percentage, and hit three home runs. Pitchers didn't have to waste pitches on these guys. They weren't going to strike out, and they weren't going to homer. A good pitcher could ease up on a guy like Johnny Temple and let his defense do its job.

On this day in 1951, Hall of Famer and former Red Harry Heilmann died in Southfield, MI at the age of 56. Best known for his big years with the Tigers in the 1920s, Heilmann finished his career with two seasons in Cincinnati in 1930 and 1932. He probably had something left as a ballplayer, hitting .333/.416/.577 (143 OPS+) in 1930, but missed all of the 1931 season with severe arthritis in his wrists. His attempted comeback in 1932 lasted for only 31 plate appearances before retiring due to the pain. While with the Reds, Heilmann homered in every NL park, becoming the first player to hit a home run in every active major league park over the course of his career. (He had previously homered in every AL park while playing for the Tigers.)

On this day in 1961, Frank Robinson smacked two homers, a double, and a single in four at-bats against the Dodgers at Los Angeles Memorial Coliseum. Robinson was also hit by a pitch and walked intentionally. He finished the day with three runs and seven RBI. Wally Post collected a two-run, pinch-hit single on his 32nd birthday. Joey Jay picked up the complete game win for the Reds, allowing only three runs, as Cincinnati won, 14-3.

On this day in 1973, the Reds and Expos combined to walk 25 times (in only nine innings!), which broke a 62-year old NL record. Every Cincinnati starter except third baseman Dan Driessen and pitcher Tom Hall drew at least one walk. Pete Rose led the way with four free passes, and Joe Morgan walked three times. Despite out-walking the Expos, 15-10, the Reds lost 11-6 at Parc Jarry in Montreal.

On this day in 1976, in the first game of a doubleheader at Riverfront Stadium, Pittsburgh's Richie Zisk* smacked a two-run homer off of Will McEnaney in the top of the 10th to put the Pirates ahead, 11-9. Undeterred, the Reds rallied with three singles and three walks in the bottom of the 10th to win, 12-11. Dave Concepcion actually erased Cesar Geronimo's leadoff single with a groundball double play, but the next five Reds reached to pull off the victory.

*Pitch at risk to Rich Zisk 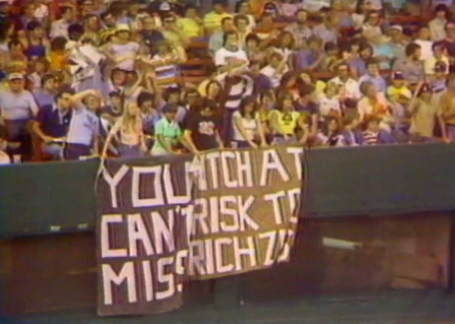 On this day in 1992, the Reds traded outfielder Billy Hatcher to the Red Sox for lefty Tom Bolton.

On this day in 2009, the Reds signed righty Kip Wells.