This Week in JPEGs: D-Rob's Catch, Votto's Reaction to BA w/RISP & 2 outs, and Corky Makes Himself at Home

Share All sharing options for: This Week in JPEGs: D-Rob's Catch, Votto's Reaction to BA w/RISP & 2 outs, and Corky Makes Himself at Home

Last week's JPEG o' the Week was Swaggin' with @DatDudeBP at the All-Star Game, which earned 64% of your votes. That was enough to win, which is to say, it was not so little that it did not win.

This week's crop of JPEGs highlights the week that was. The Reds came out of the All-Star break with a head of steam, taking two of three from the Pirates and three of four from the Giants. Here goes:

Monday's series opener in San Francisco was pretty much the best baseball game a Reds fan could ask for. Your Redlegs kicked the Giantlegs in the shins to the tune of an 11-0 bruising. The cherry on top was the final play of the game. Bronson Arroyo was working on a complete-game shutout with two outs in the ninth when Jeff Francoeur wiped his nose on his sleeve and stepped to the plate. He crushed it to deep center field, but Derrick Robinson made an unbelievable juggling catch to pull it back over the wall and end the game. Here, check the vid. And now check the JPEG! 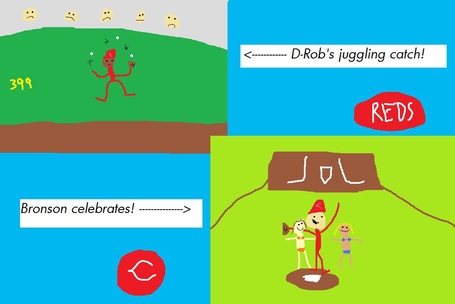 It is important to note that Bronson is "celebrating" and not "celebating." That's a different thing, and Bronson is not at all about that, trust me, brah.

On Saturday afternoon, the Reds hosted the Pirates. The game was nationally broadcast on Fox, with Thom Brennaman and Tom Verducci in the booth to call the action. Thom got his hankles all bejabbered over Joey Votto's anemic batting average with runners in scoring position and two outs this season (.125 at the time of Thom's rant). Matt Snyder at CBS responded with a detailed and well-executed rebuttal. Joey Votto's response was more succinct but much, much more effective: 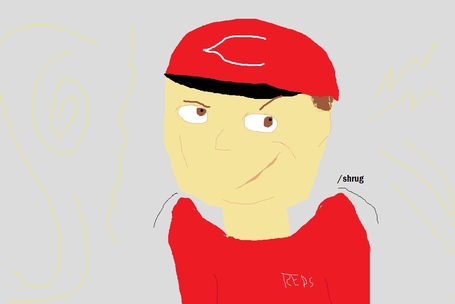 Corky Miller Makes Himself at Home in San Francisco

The Reds played four games in three days in San Francisco, including a double-header on Tuesday. The back end of that double-header was the make-up game for the rain out on July 4 in Cincinnati, so in a strange and whimsical turn of events, the Reds were the home team 3,000 miles away from home. Corky Miller took that literally, because he doesn't give a shit and no one dared tell him otherwise. 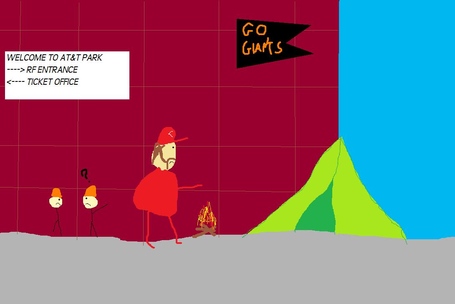