With Bronson Arroyo's contract coming to a close, "I am listening to hear where you are."

With Bronson, you can never tell what velocity he's throwing. He's so eloquent with his delivery that everything is just kind of flowing and then comes at you. His curveball looks the same as his fastball. You can't pick anything up from his arm action, or his delivery, so you have to just see the ball and try to pick it up as early as you can.

On Friday night Bronson Arroyo pitched an archetypal "Goodroyo" game - seven innings allowing only one run - when the Reds were desperate for a win. In a moment of realization, it dawned on me that I was likely watching one of Arroyo's final starts for the Cincinnati Reds. If the rotation holds true, Bronson will start 13-14 more games before the regular season ends. Few would be shocked to see the Reds and Arroyo reach a deal to keep him in around, but the Reds contractual status with other players makes Arroyo's departure after this season a probability.

When his time is up in Cincinnati, Arroyo will be remembered as one of the most interesting and accomplished pitchers in this franchise's long history. His next victory will be his 100th in a Reds uniform, tying him with Mario Soto for 18th in franchise history. With 1,057 strikeouts, only 7 Reds pitchers have more career Ks than Arroyo. His strikeout-to-walk ratio of 2.505 is 7th best in franchise history. He's a safe bet for the Reds Hall of Fame.

"And through the music he sweetly displays" ... a career worth remembering

We watch baseball to see guys like Arroyo. He is a man of extremes. He has never missed a start. In 2004 Bronson plunked more hitters than anyone in baseball. He led MLB in innings pitch in 2006. In 2011, Arroyo led the world with 46 home-runs allowed, shattering the Reds franchise record. He's tall and lanky. He was named after the actor Charles Bronson and was lifting weights at eight years old. His hair is ridiculous and his high leg-kick delivery is cartoonish. He throws every pitch other than a knuckle-ball, from every possible arm angle with pitch velocity ranching from 65 to 92 MPH. Chris Welsh often describes Arroyo's breaking ball as a "Frisbee." To me, seeing Arroyo pitch is like watching spirals of white softly flow.

Arroyo represents a transition of eras in the Reds organization. When he arrived, Ken Griffey Jr. and Adam Dunn were running the show. Aaron Harang was emerging as the Reds best pitcher and Eric Milton was in the middle of his ridiculous contract. After being traded from the Red Sox for Wily Mo Pena, Bronson made an immediate splash in the Queen City. 2006 was the best season of his career to date, accounting for Arroyo's only All Star selection. In his first season with the Reds he led the majors in innings pitch with 240.2 while managing the best ERA (3.29) of his career. He's never been the ace of the staff or been a serious contender for a Cy Young award. Yet Arroyo has been a vital cog in the Reds' transition from mediocrity to consistent contenders.

Since joining the Reds in 2006, Bronson has lasted at least 7 innings while allowing 3 runs or fewer in 100 of his 252 starts. That's 40% of his starts in a Reds uniform. Compare that to the Reds current rotation...

"Catching signals that sound in the dark" ... a partnership develops

Arroyo has always had a "personal" catcher while playing for the Reds. In '06 and '07, David Ross served as his battery mate. The Reds shuffled various catchers in 2008 as Arroyo partnered with Ross, Javier Valentin, Paul Bako and Ryan Hanigan. Since 2009 however, Hanigan has been behind the plate for nearly every start that Arroyo has made. Hanigan saw his first dose of regular playing time that season as he split time behind the plate with Ramon Hernandez. Early on, Arroyo praised Hanigan's ability behind the plate and expressed his desire to have Hanigan be his catcher. Last year, Bronson described why Hanigan has been so important to his success:

He's just a guy who's very reasonable and open-minded about the approach to getting hitters out...(Hanigan) is open-minded enough and smart enough to realize that and make that work for everyone, which makes everyone on the staff feel comfortable when he's behind the plate, which isn't easy to do. Some guys click with three or four guys, but might not click with three or four guys in the bullpen. But he finds a way to make everybody feel on top of their game.

The two have paired up for 131 starts and over 840 innings. Any retrospective on Bronson Arroyo must have a chapter on Ryan Hanigan, and vice-versa.

"I am listening to hear where you are"

The Reds will finish the regular season with 2 series at home against the Mets and the Pirates. Assuming he's healthy (a pretty safe assumption to make) Bronson Arroyo will likely make his final appearance at GABP that week. Sure, he might pitch in a playoff game if needed but that is far from a guarantee. Bronson has said, "I don't want to fizzle out into the sunset." So if you happen to be at the ballpark on that day in late September when Bronson Arroyo takes the mound for his possible final start with the Reds, show your appreciation. He's one of the most unique pitchers in the game and he's been a key member of the Reds recent transformation. Goodroyo, and yes even Badroyo will be missed. 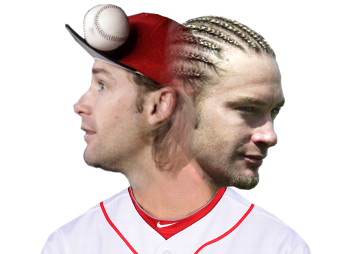