Red Reporter Reviews: Out of the Park Baseball 14

Share All sharing options for: Red Reporter Reviews: Out of the Park Baseball 14

The game of baseball generates fascinating and nearly endless discussions for the sport's fanatics. Hell, this site wouldn't exist if not for our devotion to the Reds. Countless man-hours are sunk into conversations and debates, some of which are irrelevant a month or even a week later. One could classify a good deal of these discussions as pertaining to the tactics or strategy of the game. Who should the Reds draft? How should Dusty Baker deploy his bullpen? How should Walt Jocketty and the front office spend the offseason budget? Some of these questions are only resolved years down the road with the benefit of hindsight. What if there was a way to test your understanding of the game in real time? Well, over the last 15 years, Markus Heinsohn and others at OOTP Developments have created and refined the leading baseball simulation game. The company's latest installment, Out of the Park Baseball 14 (henceforth OOTP), came out earlier this season. The folks at OOTP Developments were kind enough to let me test drive the game.

For those of you who have never played OOTP, it is difficult to imagine the control that the game gives you. Unlike The Show and other baseball games for consoles, you do not actually control the players' individual options, e.g. you don't press "X" to swing or "B" to throw a curveball. Rather, you make all of the day-to-day and longterm decisions for a franchise over the course of many seasons. One can take control of historical teams from baseball's rich past. For instance, you can play as the general manager of the Reds in the early 80s and build the supporting cast that Mario Soto always deserved. If you want to challenge yourself, then play as the 1962 Mets and see how far you can take them.

OOTP also offers the ability to create completely fictional leagues with imaginary players. In past versions of the game, this feature has often been my favorite. You can set the number of teams in the league, the playoff format, the run environment, and more. This format is challenging and eye-opening, in my experience, as "real life" is no longer a crutch for your strategy. Likewise, you're more likely to accurately assess that All-Star catcher's abilities when his name is "Vince Wilson" rather than "Yadier Molina". 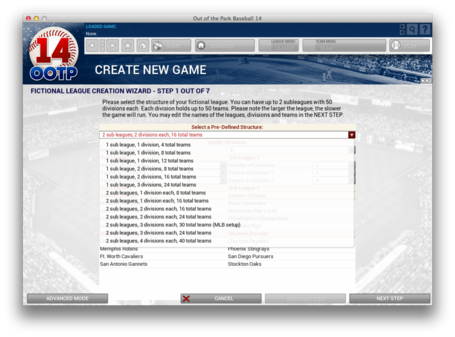 The game's standard format is to play with any of the MLB's 30 franchises in the current season. If you want a real challenge, you can even start with a minor league team and work your way to the majors. While playing OOTP, I focused on this mode. Naturally, I appointed myself as the GM of the Cincinnati Reds. 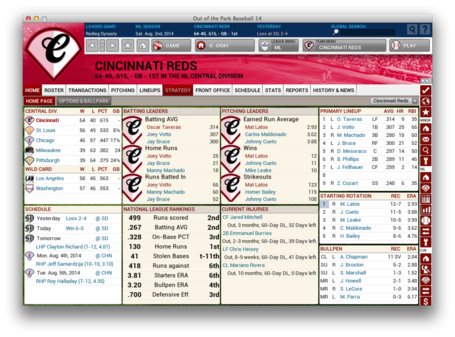 You start the season in spring training with the ability to add any unsigned free agents if desired. Since you run the entire organization, it is up to you to select the final roster and assign prospects to the appropriate minor league levels. For a beginner (or a longtime player), the process of working the farm can be overwhelming. Fortunately, OOTP gives you the option of delegating this task to the computer. In addition to roster moves, you can also set the organization's lineups, depth charts, and rotations. OOTP generates a plethora of information to assist you in making these decisions. When I first started playing the game about seven years ago, I was amazed that the game provided you with a player's value over replacement player (VORP). Well, just as the leading sabermetricians haven't stopped developing metrics, the OOTP haven't stopped updating the game's available stats. OOTP now provides you with weighted on-base average (wOBA), wins above replacement (WAR), and fielding independent pitching (FIP) in addition to all over the traditional stats (average, runs, RBI, stolen bases, wins, etc.) 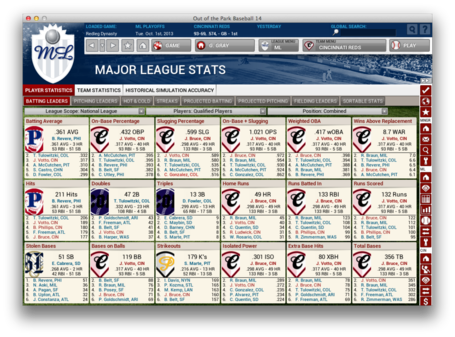 "Now Graham," some of you are saying, "I'm not an emotionless computer like you, and I like the human side of baseball." Well, you're in luck, because OOTP also generates ratings for all players based on a scale of one to 20. These ratings cover contact, power, stuff, and much more. They also feature potential ratings that act as projections of a player's ceiling. OOTP even neatly summarizes these ratings into overall rating, which ranges from 1/2 to five stars. Aroldis Chapman, for instance, earns a five-star rating in the game. As you can see in the following screenshot, OOTP includes personality factors for each player, and you must manage each player's morale. There is also a challenge in evaluating these ratings though as these grades come from your scouts. Thus, you must spend the money on good scouts to ensure that you receive accurate information on big league players and prospects. 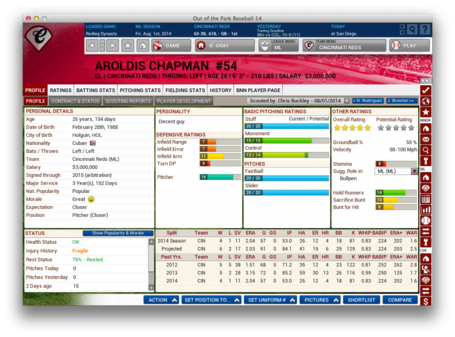 Once the season begins, you can actively manage each game or simulate weeks at a time. I like to take control over certain games, especially during the playoffs. The in-game controls are very simple and straightforward. On offense, you simply select the batter's approach or instruct the baserunner to steal. Similarly, you can tell your pitcher to pitch around a tough batter or even issue an intentional walk. 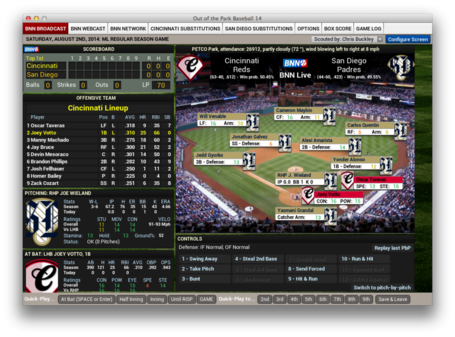 As you know, the 2013 Reds are a pretty damned good team, so there wasn't much room for major improvements to the roster over the course of the season. However, I did make a couple of moves over the course of the 2013 season in order to buttress the roster. The OOTP AI has historically undervalued prospects at the expense of veterans. This means that you can take advantage of the computer to stock up on good young players. I didn't think it was quite as easy to do so in this version of the game, but I still had success pursuing this strategy. On June 29th of the fictional 2013 season, I traded Shin-Soo Choo to the Cardinals for Oscar Taveras. Similarly, I traded Todd Frazier, Billy Hamilton, and Neftali Soto to Baltimore for Manny Machado. These trades are unrealistic, but there's an easy fix: Don't make them. You can still make fair, realistic deals that benefit your team without ripping off the computer-controlled teams.

As in real life, it is important to draft well in OOTP in order to sustain your team's success. OOTP 14 has a realistic draft complete with real 2013 draftees such as Mark Appel, Jonathan Gray, and Phillip Ervin. The game also allows you to negotiate signing bonuses with draft picks, but you have to stay under the total slot amount or face a penalty. OOTP 14 also offers some new ways to obtain players. Now you can sign international amateurs or players from foreign leagues (like Yu Darvish). You might say these are small additions, but this attention to detail sets OOTP apart from other games.

With only the few trades mentioned above and some sensational play from Cincinnati's regulars, I was able to guide the 2013 Reds to the NL Central title with a record of 93-69. The Reds swept the Rockies in three games in the divisional round. The NL Championship Series was a tense seven-game affair against the Nationals, but a couple of bullpen implosions (maybe this game is too realistic) led to a series loss. 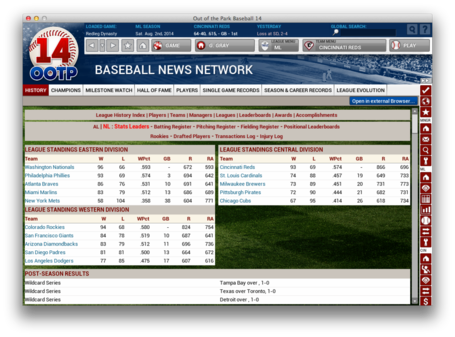 Like life, an OOTP league goes on. In the offseason, I signed an impact international free agent pitcher to replace Bronson Arroyo. With the rest of the team set from 2012, I used the extra money to fortify the bullpen.

If you're a baseball fan with a mind for strategy and analysis, then I would highly recommend OOTP 14 to you. You can purchase the game at OOTP's website for $39.99. The game is available for Windows, Mac, and Linux operating systems. It is well worth the money as you can spend hours and hours simply exploring the game's myriad features. If you get bored with the standard, historical, or custom league formats (and I can't imagine how), then you can play in online leagues. Once you finish familiarizing yourself with each mode, OOTP offers immense replay value. This is a game you can continue to play for months or even years. If anything, you might find yourself playing the game too much.