Share All sharing options for: Red Reposter: Today is Tomorrow

What's the Storyline, Kenneth? Latos says that he was sick before the game and it took him a bit to settle down. Apparently he was fined under-the-table by Selig for hitting Neil Walker, so he's not happy about the beaning of Choo (who prefers to go by Choo)."I think it's time that somebody steps up and starts disciplining the team that's drilled the most guys in the league," Latos said. He's obviously a bit frustrated, but now that this clickbait is out of the way, let's move on. Latos also *gets* the silliness of the win stat: "I don't care whether I get the 'W' or if Chapman gets it. I don't care if they bring [catcher] Corky Miller up from Triple-A to pitch the 10th inning if he gets a 'W.' I care about team wins."

Votto for Prime Minister. He was asked about giving Pete Rose a thumbs up after his Monday home run. Fay caught up with the hit king and reports that Rose didn't ask for a dinger for his birthday. Votto, on his part, has the most senatorial quote I've ever seen from a 29-year-old baseball player:

This guy, you guys. This guy.

I sure hope Lutz isn't gonna be a PHer for the next beautiful forever. I'm glad to see he's enjoying the challenge or whatever, but he needs to start playing every day again. Heisey's coming back soon, so hopefully that's that by July until September.

Dr. Baker on the Reds offense: "You can get home-itis," Reds manager Dusty Baker said. "It's not deadly. But it will sure make your life miserable if you get it." Dusty was an Old West doctor in a previous life and he just proscribed everybody whiskey and meanwhile Sherrif LaRussa is in the cattleman's pocket after investing in barbed wire. Clint Hurdle isn't in this story because the United States still discriminated against Purple-Americans back in the 19th century.

Joey Votto made out of Legos, now in Louisville. So go check that out when you can.

Jesse Winker dominates the Midwest League Home Run Derby. The 19-year-old Uncle is hitting .291/.395/.493 in a league where the average age is 21. Cool, huh? You wanna know what's cooler? A photograph of him with George Foster. 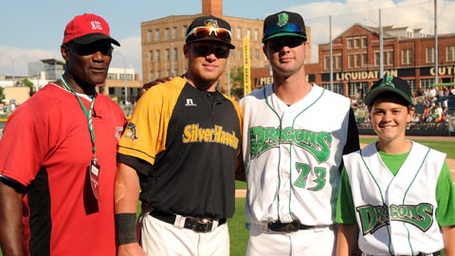 The_Vole got me into Field Notes a while ago, and I'm just starting their Spring 2012 Collection's Drive Into the Gap, a short story about fathers and sons when the father worked for the Baseball Hall of Fame. So far so good...just wanted to let you all know.

Saive Mariemount. It was put onto the National Historic Register's list of endangered places. Remind me to get paid to write about places like this, because I'd love to be this generation's William Least Heat Moon but mostly just the Ohio River Valley.

Tonight at 7PM, Arroyo faces Jeff Locke, he of the .233 BABIP and 84.4% strand rate. This game could be great fun or very frustrating. Let's hope for the former.