I went to the Opening Day of the Dutch baseball season about a month ago, and it was a great time. Literally nobody wanted to touch this story, so you get to relive Opening Day during our tidy little Off Day. Lucky you!

It’s actually a lot what it sounds like to watch a Single-A ballgame on the moon. That is, essentially, what Honkbal is. My partner in spectating (who goes by the name of Jory) grew up in Kansas City, home of the Royals. My point is, we know from bad baseball. But the Dutch league, the Honkbal Hoofdeklasse, is not quite that. It’s just...off. Honkbal is a looking-glass ballgame where everything looks basically like the game I grew up on. And yet... 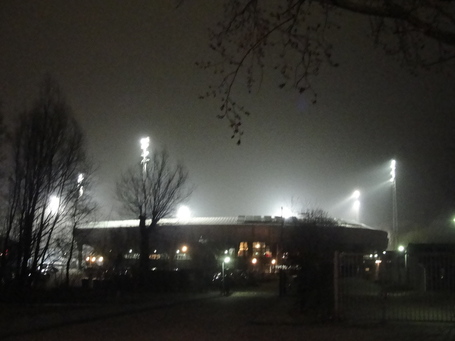 In a very recognizable Opening Day tradition, the weather in Rotterdam was 40some degrees and rainy enough to make me fear the game might be cancelled. In another recognizable tradition, the stadium was in the middle of nowhere and we walked past a dozen barbers, a freeway, and a garish mosque in order to DOOR Neptunus' concrete-and-steel home. To be honest, the stadium reminded me more of a horsetrack than a ballfield. I walked past the ticket counter quite obliviously before I saw Jory running to catch up to me holding a blue stub and demanding five Euro. I told him I'd make it up by buying him a beer. 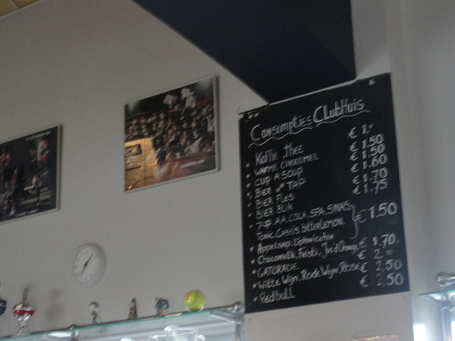 I would end up buying him many beers, and vice versa. Find a bottle for a euro-seventy (about $2) in this country is seemingly impossible, even if it’s just a Heineken. Finding a bottle in a maritime- and baseball-themed bar playing the matinee matchup of the Blue Jays and Tigers is unbelievable. I felt all-of-the-sudden like one of those luxury box fans who comes to the game for the atmosphere and to make business deals with my be-blazered colleagues. The Heineken didn’t hurt this perception, but the crowd did; mostly made up of slightly overweight Dutchmen from all throughout the old Dutch Empire, donning either the iconic Neptunus trident or a probably random MLB logo on their cap. "Crowd" may be a strong word. The spectators were about eighty strong until a local little league team - the Unicorns - showed up around the second inning. This was not quite what I was expecting for Opening Day, even in Europe.

Yes, eighty. Give or take. I didn’t really count heads, and the old journalist trick of "four people per square meter" didn’t really come into play. Some of them are clearly other baseball players, you can tell by their baseball pants and their disregard for the "no cleats" signs in the bar and patio. Oh, that’s right, there is a bar and patio. Right behind home plate, actually. The best seats in the house are actually patio chairs put out about 25 meters from home plate, with only a short fence black mesh between them and the ump. When I walked into the bar around the 4th inning to re-up, someone had a friendly dog in there. Most Dutch dogs are a bit diffident, so it was nice finding one eager for a scratch. It was very nice finding one just behind home plate.

The nice thing about not having fans means that the fans are not being bilked for revenue. Most of the noise here was pidgin English-Dutch chatter from the Mampaey bench, "Lekker play, Stevie!" and the like. Neptunus was oddly quiet and so were their fans; strikeouts were followed by a beat or three of silence. The focus is on the game and not in some message-controlled way but actually because people are out here in actually awful weather because they want to watch a baseball game. There’s no between-inning entertainment or mascots or non-baseball activity because that’s not baseball, I guess. You can go to a soccer match if you want all of that. 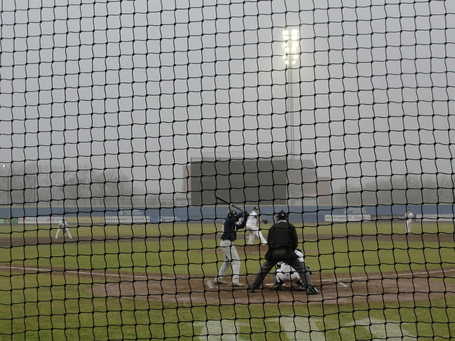 There is, of course, a distinct Dutchness about everything. Mostly in the names. Frans van de Heuvel, Joris Naber, and Shaldimar Daantji are the leaders of the Dutchness category. There are also plenty of gentlemen whose names sound like EA Sports’ create-a-player bugs: Dwayne Kemp, Rafael Jozefa, and Raily Legito (who doesn’t start and is sadly enough actually not all that legit). A home run in the third - the third! - brings the whole team onto the field like it’s a walk-off and "Whoop! There it is" blasts from the PA. It is one of only three songs we note that might actually have a license attached to it. Some 5’7" reliever comes in for The Hawks and does a decent Tim Collins impersonation with a sick curveball before he suddenly contorts into a Danny Ray Herrera impersonation and starts giving up runs. The only person we find keeping score is a chain-smoking lady down the first-base line. She also has tupperware full of gummi treats that Neptunus players are snacking on. The first-base coach demand a bullpenner to give him the hook-up in the sixth. Most distressing is the oil can sitting next to the lawn chairs on the patio. I spend the entire game hoping that it’s empty, because everyone is using its funnel spout for an ashtray.

All of that said, this is baseball - or honkbal - and even with a small crowd it’s worthwhile. Diegomar Markwell, World Baseball Classic veteran, got the Opening Day nod for Neptunus and was dealing. We didn’t realize how much we usually rely on a box score until we reasoned that Diegomar went 4.1 no-hit innings, then saw him come out two outs later with a final line of 5IP 7K 2BB 3H 0R. Still, not bad. Mampaey The Hawks’ pitcher gave up six runs in three innings and proved to be their ace. The bullpen would give up another 11 runs through four. We’re not sure if seven innings is the Honkbal norm or if it was a mercy rule; when I asked why they stopped playing, the only response I got was "because the game is over." But with the temperature dropping fast and the score at 17-0, we didn’t complain too much and instead chose to hightail it back to the station to get back to our hometown of Utrecht.

It’s hard to call a 17-0 blowout in front of a high-school-sized crowd an incredible sport experience, but that doesn’t mean we weren’t euphoric about the chance to finally catch some baseball. It’s like being deprived of oxygen for a bit too long. Once two midwesterners were back in a baseball-rich environment, we were giddy at the opportunity and also yeah, probably the $2 beers. Honkbal is still baseball, still the same rhythm of quiet broken up by sudden action, still the same concert of duels that I grew up getting used to. The only difference is a sense of oddness and discovery when I find its normalcy in a place I really do not understand. Baseballs is decent enough on its own. Watching Coen Merckx dig in on a 2-2 count from Tim Roodenberg, though, is something special. 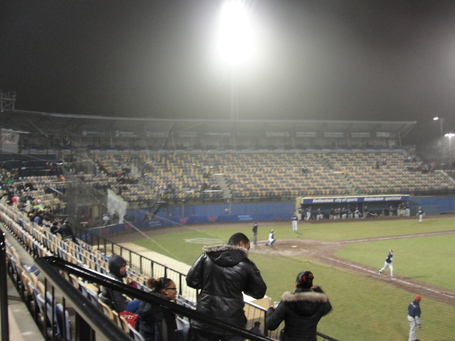 Near the end of the game we stepped away from the patio to take a stroll around the rest of the park. It doesn’t take too long, but the patio was starting to drive me a bit crazy. Unused to the protective screen, watching the game through it made me feel like I was looking through a Magic Eye. Up on the third-base line taking in the stadium, the park beyond right field, and the trains scooting in the distance, Jory made a point of the cheap tickets, cheaper beer, patio behind home plate and friendly chain smokers and dog. "This is exactly how I would build a baseball stadium," he says. "Major League stadiums are bullshit." MLB baseball is good baseball, great baseball even!, but he is right. It all does smell kind of like bullshit. Honkbal isn’t more pure or more wonderful than the MLB. It’s just more fun. 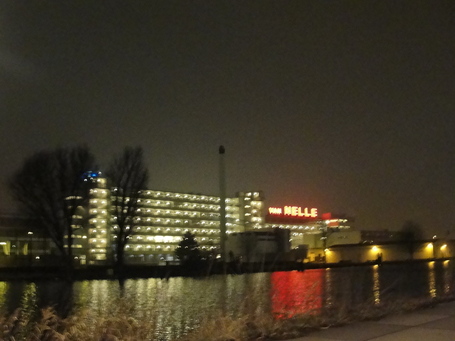