This week in JPEGs: Nick Swisher thinks Aroldis Chapman is heinous, Mark Reynolds is a derp, and Joey Votto is the best

It's basically a low-rent This Week in GIFs.

Share All sharing options for: This week in JPEGs: Nick Swisher thinks Aroldis Chapman is heinous, Mark Reynolds is a derp, and Joey Votto is the best

Welcome to the first-ever installment of an ill-conceived cheap knock-off of a decently successful weekly column. The GIF has become a popular tool among the interneterati in recent years. Its relatively small file size and constantly looping nature allow people to imbed funny or interesting or amazing video clips into webpages or comment sections with ease. Everyone loves GIFs. So I'm attempting to do for the JPEG what Jon Bois has done for the GIF. This is almost certainly going to suck honky apples.

I have created JPEGs in MS Paint for three of the most funny/interesting/amazing things that happened in Reds baseball this past week. Vote for your favorite!

On Monday afternoon, the Reds and Indians took the field for a Memorial Day matinee. The game was knotted at two runs apiece in the bottom of the eighth inning when Indians manager Terry Francona called upon lefty Nick Hagadone to face to Joey Votto. With Shin-Soo Choo on third and only one out, this was clearly the biggest situation in the game. Joey Votto sent a screamer into the left-center field seats to give the Reds the lead. 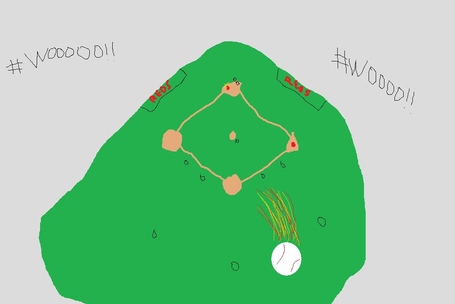 Wooooaaaaahhhh, bananas! He got all of that one (you can tell from the fire trail on the ball like it's leaving the atmosphere lol). This was awesome, and Joey Votto is awesome. It's like he steps into the box and says, "Hey baseball. I'm gonna crush the shit out of you. Okay?" and then the baseball is all like, "Ouch!"

Right after Votto hit the go-ahead home run (see above for artistic representation of said event), Aroldis Chapman came in to close out the Indians in the top of the ninth. Chapman struck out Asdrubal Cabrera for the first out, so Nick Swisher swaggered to the plate. Chapman whipped a zinger to the screen, a 100-mph torpedo that gave Swisher the bejeebers. The next one came right up into Swisher's man cave, another 100-mph fastball just inches from Swisher's face. He was understandably not amused. 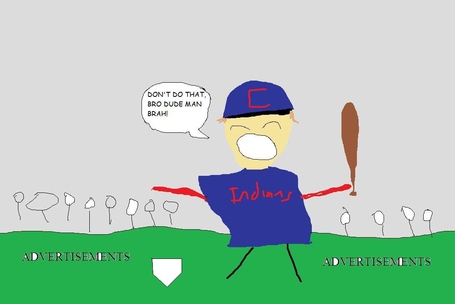 He kindly requested of Chapman that he not "do that." Chapman looked in with detached bemusement, in much the same way a lion regards a lily. Swisher lined out to left and exchanged a few words with Chapman on his way to the dugout. We all thought it might lead to an all-out beanball war, but I'm guessing Chapman bought Swisher a Bud Light Limearita that night so everything was cool.

Mark Reynolds is a derp

Mark Reynolds is just about the DHiest ballplayer in baseball. If one were to describe him as a poor man's right-handed Adam Dunn, one would be given a red ribbon for accuracy. The Indians signed him this offseason to serve as the team's DH, but in an NL ballpark, Terry Francona was compelled to play Reynolds in the field. He's a bad first baseman, but he's a catastrophic third baseman. Francona was probably hoping he could get by for a game with Reynolds' bad glove at the hot corner, but he was wrong.

With Jack Hannahan at second and Shin-Soo Choo at first and only one out, Zack Cozart attempted to bunt the runners over. He popped it up though, a high-arching fly to the third-base side of the mound. Cody Allen camped under it and seemed to have it in his back pocket, but Reynolds leaped in like a dumb kid excited for the ice cream truck and the ball landed between them. 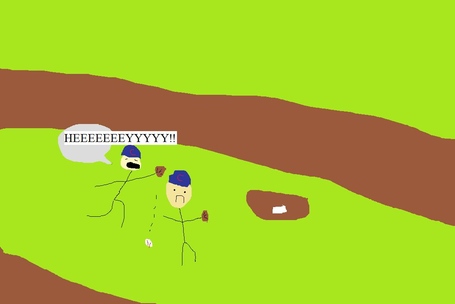 Cozart was safe at first, but they were able to get Choo on a force out at second. Votto then struck out swinging, so no harm was done on the scoreboard. But Terry Francona's forehead was noticeably red in his postgame interviews, presumably from all of the facepalming.

Now vote for your favorite!