Chicago just wasn't made for these times. Reds 5, Cubs 2.

Share All sharing options for: Chicago just wasn't made for these times. Reds 5, Cubs 2.

Homer Bailey threw a not-quite-Hossian six innings, but allowed just two runs while striking out eight, walking three, and not allowing any homeruns. They say you find out something about a pitcher when he doesn't have his "A" stuff. We found out Homer's "B" game is still good enough to beat the Cubs.

Honorable mentions to Derek Robinson for executing a key suicide squeeze bunt, Ryan Hanigan for doubling in an insurance run, Todd Frazier for driving in a couple, and the bullpen for three scoreless. 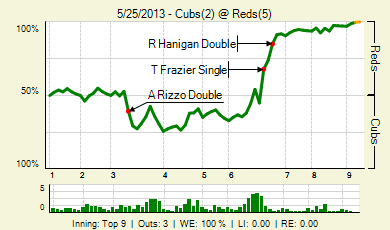