If your name ends in O and you play for the Reds, you just had a pretty good day.

With all due respect to Bronson Arroyo, who was masterful today, Joey Votto wins.

He wins the JNMHSotG, he wins baseball games, he wins MVPs, he wins that Canadian Athlete of the Year award thingomasomethin', he wins over your girlfriend, my girlfriend, his girlfriend, and he wins both life and the internet.

If only we knew what he was actually getting paid to do.

Honorable Mentions are due to several Reds, obviously, as the pitching was stellar and the bats broke out in a big way. Arroyo threw 7 2/3 innings and was as effective as Goodroyo has ever been (i.e. throwing strikes and inducing weak contact); Todd Frazier broke out of his 0 for 20 streak with 2 hits; Jay Bruce was 2 for 4 with a sac fly; Ryan Hanigan was 1 for 3, scored 2 runs, walked, and hit his 1st HR of the season; and Donald Lutz was 2 for 5 with a smashed double and a million dollar smile. 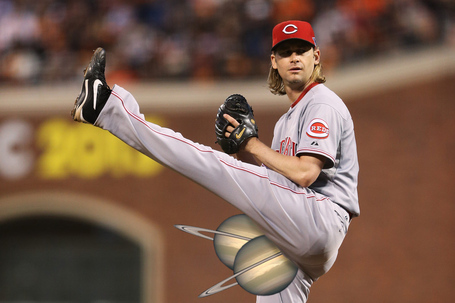