Bruce and Votto both go yard, but Tony Cingrani likely bid adieu to the Reds with a mediocre outing.

Joey Votto singled and hit a 420-foot moon shot to center to tie the game in the 8th. Unfortunately, it wasn't enough to sustain the Reds' 6 game (overall and road) win streak. Honorable Mention is due to Jay Bruce, who was 2 for 4 for a second straight night. He hit a 2RHR to start the Reds' scoring.

Tony Cingrani allowed three runs in just five innings in what was likely his last start with the big league team for a while. Mike Leake has been announced as Tuesday's starter. 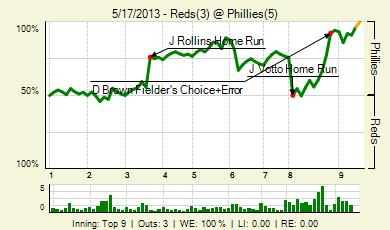