Share All sharing options for: "BOO" Ain't No Country I've Ever Heard Of: Reds Win 6-3

The Joe Nuxhall Memorial Honorary Star of the Game:

Jay Bruce went 2-5 with 3 RBIs and started off the scoring with a double in the first inning. It's not like anyone will change their minds about one of the premier right-fielders in the game, but I mean goddam you get first-inning doubles to set a statement for the game and you get the JNMHSotG.

Of course Choo and Paul going 2-4 each at the top of the order (Choo also walked once) helps the guys in the meat of things get the paycheck stats. Brandon Phillips went 2-5, Derrick Robinson got his first MLB hit and a timely first MLB run, and Johnny Cueto battled for six innings without his best stuff or the best umpire, ultimately going 7H 3ER 3BB 6K. He didn't give in when he tired and Strasburg did, and the difference was the ballgame. And three perfect innings from the back of the bullpen. Whether or not they were necessary, the Reds'll take 3IP 1H 0R 0BB 3K all the time. 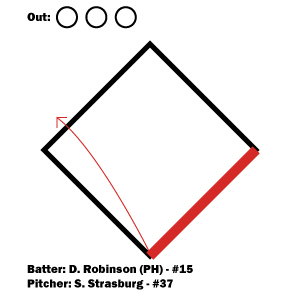 In his second MLB at-bat, Derrick Robinson stepped in against Strasburg. He showed bunt on the first pitch, bringing Zimmerman into the infield grass. On the second pitch, Royal Derrick struck a fastball past the nearby Zim and into left field. Choo's line-drive single brought Robinson to third, and when Xavier Paul hit a grounder to the second baseman, Espinosa thought he could get the quick Robinson out at home. He couldn't, and the Reds had a run that they wouldn't relinquish, all thanks to the speed and smarts of Derrick Robinson.