Who's the newest Red gonna be (it's gonna be Phipps)

The big news is that Ludwick is on the DL with torn cartilage in his shoulder after an awkward slide. He's likely going to be out for a matter of months...we may see him by the All-Star Break, but at his age and with shoulders being what they are, I am skeptical. This is the sort of thing that hurt Rolen's, Casey's, and Kearns' careers, and Ludwick is older than they were during their injuries and rehab. But medical technology is a crazy thing, so we'll see. Heisey sounds prepared, which should not be much of a surprise.

The betting odds say that Heisey and Paul will platoon in left with a new outfielder joining the mix. Fay hedges between Derrick Robinson and Denis Phipps; they've both had good springs and they're both CF-capable. Robinson is a switch-hitter without much pop and Phipps is a righty with a little bit of pop. Let's look at the Reds' options and see what we come up with...

Leake to LF, Chapman to the rotation

Shut up. I meant serious options. Don't make me start with the bottom of the barrel...

Micah Owings to LF, Chapman to the ro--

I SAID SHUT UP

Trade for a LF!

I feel like trades this early are super-rare. Nobody is in "sell" mode yet and if a guy was on the market, he would've been traded some time in Spring Training. These sorts of things don't happen now that Jim Bowden doesn't have a job.

"Hey, let's replace a righty power bat with a switch-hitting speedster who has yet to play outfield in a game they keep statistics for. Let's start the abritration and control clock for a top-prospect who may take time to develop. Let's make a guy feel he has to press in cold weather on a fragile body. Let's give a plus-plus Derrick Robinson 20 PAs instead of taking the opportunity to burn Derrick Robinson if need be. I am a strawman version of an ESPN comment."

Here's an exhaustive list of current free agents. Bobby Abreu is a part-time DH more than anything at this point, and then you start seriously convincing yourself that Chris Dickerson, Willie Harris, Joey Gathright, and Todd Frazier's brother are all conceivable options. All of those guys are ex-Reds for a reason.

Now we're getting into serious considerations. Frazier is rumored to be able to play a pretty decent left field and could get moved farther up the foul line. This would mean Jack Hannahan becomes a starter at third, and he can at least pick it and give you some professional at-bats. Hank Rodriguez could get called up and instantly become the best bat on the bench, and if he can respond well to coaches and pinch-hits, could work his way into the starting job at the hot corner. This is an actual thing that might happen. You would essentially be trading Heisey's bat for Hannahan's bat in the early-going, which is probably trading some SLG for OBP. Still, I think it doesn't happen because the Reds have shown a tendency to prefer moving as few parts at a time as possible. Also, the powers-that-be may want to keep Hank in AAA working every day.

Call up Lutz, make LF the People's Republic of Lutzembourg

Lutz is probably the best power threat in the org outside of Hamilton County, and he seems to move pretty well in left field. However, Jocketty mentioned that they're looking for a righty and Lutz is not a righty. Lutz is, at this point in his career, likely not more than Xavier Paul with worse defense. Xavier Paul, therefore, makes him redundant.

Give Derrick Robinson his long-sought cup of coffee

The Royal Derrick had a great spring, but he is still the dude who managed a .325 SLG in the hitter-heavy PCL last year. He couldn't find a place in the Royals outfield, but then again, Wil Meyers couldn't either. Derrick is still only 25, so he could still be developing and all that. And he is quick (314 MiLB SBs at a ~75% rate) and he doesn't strike out much. But still. .325 SLG in AAA, .282 SLG in AA the year before that. The new guy is needed to pinch-hit, not pinch-ground-out-to-second.

"What do they call you up in Cincinnati, boy?" "They call me MISTER Phipps."

Sidney Poitier allusions aside, Phipps makes the most sense. He's right-handed and can stumble into a few more fastballs than Robinson, sending them a bit farther away. He's a very solid defender all around the outfield. It gives him a similar profile to Heisey when Heisey was first called up in 2010, and that worked out pretty well for everyone. Mr. Phipps is 27, so it's not like he's doing much in the way of development down in Louisville. True, he's probably not well-thought of in the organization since he got booted from the 40-man just this past winter, but that also means that he's completely fungible and can get booted again if a better LF option comes across. So it's a good April option while you let things sort out. Just to get you excited, here's his offense and defense:

So what does it all mean?

Basically, Ludwick's bat is going to be replaced by Peisey or Hannahan for the next week, while Phobbinsiguez gets a chance to show they deserve a longer look. Hank is the only of the call-up potentials on the 40-Man, but that's not really much of an issue, to be honest. There's always spots in the 40-man.

If you were the GM and this was OOTP, you would probably call up Hank and move Frazier to the outfield. That's the best combination of youth potential and the maximization of resources. But since there's no telling to how rotten the apples might get if you upset the apple cart what is going on in this metaphor, it's more likely that the Reds will go for a more modest move. For the reasons discussed above, Phipps is probably a better option than Robinson. The only reason I could see Jocketty opting for Robinson is if he decides the Reds need more of a pinch-runner than a pinch-hitter, and I can't believe the Reds would cut off that particular nose to spite such a wonderful face oh God my metaphors are awful this morning.

But yeah, Phipps is the righty power-bat to complement Paul's lefty power-bat on the bench. And Phipps can LIDR for any outfield position. The Reds can take this opportunity to vastly upgrade their outfield defense, as both Heisey and Phipps are great corner outfielders who can play CF or at least give Choo much less room to cover. That's the move that makes sense in April.

News in the land of two shoulders:

Fangraphs has a neat write-up on pitch framing. They focus on the Brewers' Luroy, but their data vizualization is pretty neat: 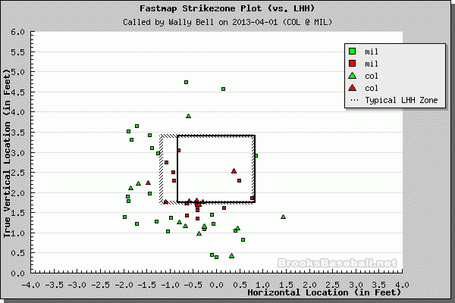 Hanigan, of course, is also known for his pitch-framing abilities, Monday's game be damned. It's interesting to see that Lucroy was able to add basically an extra ~2 square feet of strike zone. Watching Hanigan yesterday, I was impressed less by his framing, which, yeah, small sample size and all, than I was by how much Cueto trusted him. Over and over, I saw Cueto take the sign from Hanigan and immediately go into his windup, which meant that he already had the ball gripped how he expected Hanigan to put down the sign.

When we talk about how good the Reds' staff has become in the past few years (and also consider things like the Giants' staff and, yes, the Cardinals' rotation) we may be giving too much credit to Bryan Price et al and too little credit to Ryan Hanigan. Perhaps he's the real pitching witch?

I'm not sure if I'm allowed to do this, and tell me if I'm not, but I saw this stupid article about coffee, and I know you like coffee, so let me know what you think.