Evening Reposter: Cingrani up to challenge of AAAA hitters

Thanks to the day game and the RF76:18GR we're doing a nightcap tonight. Come hang out in this, the party thread, and ruin KMiB's hard work!

Share All sharing options for: Evening Reposter: Cingrani up to challenge of AAAA hitters

This is written before the day-game is underway under the expectation that a) the Reds win and b) did so in nine innings or less. If you're looking for a game to watch while reading this, I would recommend the Dodgers visiting the Mets. Matt Harvey has been Cingrani-esque in his four starts so far: 4-0 with a .93 ERA, 3.1 H/9, 9.9 K/9. He seems to be a fun one, and you actually don't have many other options. Anyways, to the Reposter.

It is a light links day, though, because everyone covering the Reds is exhausted by the extra-inning games. The Enquirer does have a Cingrani quiz if you have the time. I got 8/10.

Since there's no links, I'm going to take time to talk about one Anthony Michael Cingrani. Geez, he sure is great, isn't he? I know, I know, it's only the Marlins and the Cubs. Those two teams are only marginally better than International League competition, but it is getting a bit frightening that he has really just not had any hiccups at all as a professional baseball thrower. The question we're all wondering is, why?

Brisbee's article about Tony made mention of his deceptive delivery. This is difficult to understand from a fan's perspective, I think, but I'm trying to get there. Basically, Cinnerman has three different "hitches" in his delivery: the ball is behind his back, then behind his head, then getting released. These are so far apart from each other and in such different trajectories that the batter has precious moments taken away from his recognition. Thus the late swings, thus the strikeouts. If you can put a ball precisely where the batter doesn't want it a split-second before he wants it there, you can get strikes.

Eventually, though, the league is going to catch up on this. Batters are paid millions of dollars to figure out how to time pitchers. Cingrani will get timed. Which brings up his next advantage, illustrated thusly: 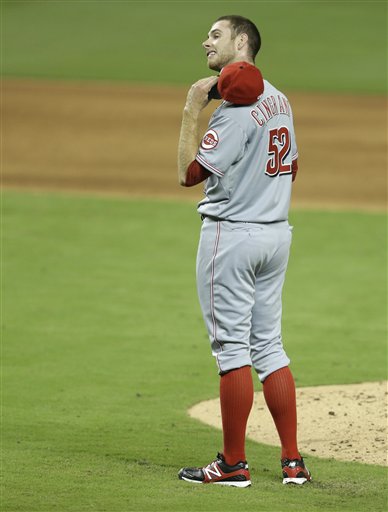 Dude has loooong arms. Eerily long. Slender-Man long. When he pitches, it's a bit of an optical illusion. His arm shouldn't be able to get as close to the batter as it should. I'm not exaggerating here. Check out this Brisbee still: 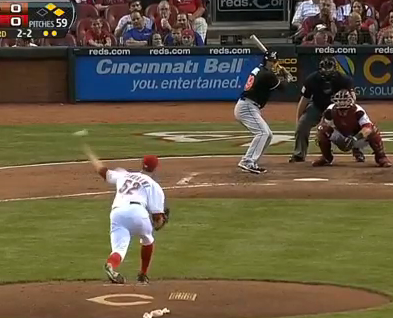 You could tell me that Cingrani was born with a horrifying birth defect where he has a leg growing out of his shoulder and I would not be surprised.

So the longer arm means more leverage, more movement, more speed, and an all-around meaner fastball. How cool is that?

There's concern that he can't rely on his fastball exclusively for long, and he's been throwing 11% sliders and 8% changeups so far this year. His 81% fastball rate puts him behind Ross Detwiler and Bartolo Colon, who are throwing 93% and 90% respectively. Those are a lot of fastballs! Behind them in the high-70s are Wily Peralta, Lance Lynn, Juan Nicasio, and Shelby Miller. In short: young dudes with live fastballs. Cingrani's reliance is nothing strange, and of course he'll have to do more the more times he goes through the league.

He's impressed me with his offspeed usage so far. He doesn't seem to be able to throw much for strikes, but he's done a great job keeping sliders in the dirt and changeups out of the zone. Those can't hurt nearly as much. Cinnerman's only flaw so far is that occasionally a high fastball won't be quite high enough. He's going to need to mix in a few two-seamers and throw off-speed for strikes in order to keep on improving. But c'mon, this lanky fella has been improving at every single level, I don't see why he should stop now.

In short, the Reds have a cryptid murderer throwing strikes for them every fifth day. Like most cryptids, the enemy is actually more afraid of him than unable to defeat him. But oh man, that fear. Watching Cingrani go against stern, burly, men and make them go back to the dugout with excuses and exasperation has been just too much fun so far. I hope it never ends.