We here at RIWIAW won’t go so far as to say that Dusty Baker is the greatest leader of men since Nicolae Ceausescu, but we admit that he’s a decent major league manager. That being said, some of the criticism levied towards him is warranted. Namely, his two major faults are his default preference for less-talented veteran players and an affinity towards bunting that only John Paul Jones could relate to having. However, the thing about ruining young pitchers? Even Mythbusters doesn't take that seriously. However, that won’t stop The Onion from making jokes about it. (Editor’s Note: The Onion was is a satirical newspaper that's very similar to The Colbert Report , only without much of the humor). Today’s joke? That Dusty left Aroldis Chapman warming up over night and forgot to sit him down. HAHAHA, GET IT? IT’S BECAUSE DUSTY IS TERRIBLE WITH YOUNG PITCHERS! This would perhaps be a bit funnier had The Onion not written the exact same thing three years ago. Keep drawing from that well, folks.

It's your Morning Man Pinch Hit of the Week, happy that the Reds are winning despite their best efforts not to do so. Now then . . .

Votto's power is gone and is not coming back. It appears that my noble and gentlemanly piece on Joey Votto's power woes has become the subject of mockery in the pajamapants-o-sphere by silly sabermetric rattlers. It's a tad silly for people to become so caught up in statistics that they cannot see the forest for the trees. One of the most important stats in baseball is the home run. Not the intentional walk. Not the catcher's interference. Not the balk. Glavine and Maddux never waxed poetic in a Nike commercial about chicks digging the base on balls. But Doc, what about his value as a three hitter? The true value of a number three hitter is not what pitchers think you can do, but rather what you can actually do. The Votto contract is going to be this team's biggest albatross since Eric Milton. He cannot hit homers. Do you really want to pay $17 million a year for a contact hitter with no speed? I don't.

TUNE O' THE DAY. There are some tunes that just make you enjoy Zumba even more.

We here at RIWIAW are willing to disclose that we’re a bit biased towards the "woos" that you hear at Great American Ballpark. After all, the creator of the woo is a pretty awesome guy named Duane who is one of the most accommodating and nicest Reds fans we’ve ever stumbled across. However, we’re not going to act like "The Woo" is some sort of movement that will cause 30,000+ to partake in it. Though, frankly, it is preferable to Sweet Caroline. In all honesty, The Woo is a product of under-attended games. You’re going to be able to hear individual fans "woo" when only 17,000 and change show up. Don’t like it? Show up and drown out those that are annoying you. Don’t lash out at fans trying to have a good time. Don’t be a McAlister. We here at RIWIAW aren’t fans of the wave, but we don’t lash out on Twitter or threaten to blow those jackballs away with high powered water guns. Granted, that's only because it would miff our parole officers.

Thursday - The Old Man Is Boring

When the Cincinnati Enquirer isn’t displaying comments from mild-to-moderate racists and hack political operatives using absurd pseudonyms, they’re a sounding board for vapid complaints in their Letters to the Editor section. Today’s holocaust? The Reds’ decision to play Tuesday’s game despite the threat of thunderstorms. After all, baseball has never been played in wet conditions. Ever. Having highly paid athletes compete in the rain is akin to having them spending the offseason in a death march in Bataan. And how dare the Reds force people, beyond their will, to buy tickets to a baseball game and attend it knowing full well that wet weather could occur. If only Hamilton County taxpayers gave more money to professional teams in the worst (and possibly most corrupt) stadium deal ever, then perhaps they could have played games rain-free under a dome. 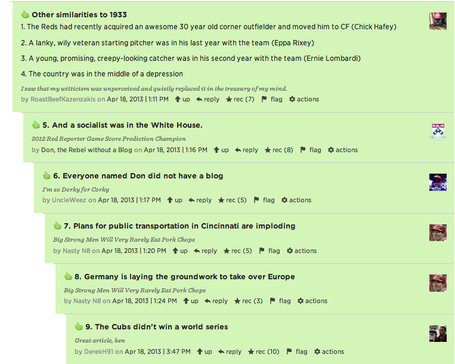 Since nobody reads Fanposts anymore after the redesign ever, we here at RIWIAW figured it'd be a good idea to show what the rest of you fools missed by not attending Red Reporter's Game 2 Outing. Thankfully, this particular article is .gif and dancing-free. However, that does not mean it passes muster in terms of sobriety amongst attendees. However, we're fairly certain that some of the spirits we imbibed in are responsible for the recent wave of ghost comments that have struck the site. We swear, it's the last time we ever drink absinthe with people on the internet.

Sunday - Do you believe in Michelobs?