Mike Marshall and Scott Sullivan think the Reds need alliterative relievers who can go >100 IP in order to get anything done this season.

Share All sharing options for: Red Reporter: They Shoot Relievers, Don't They?

The Reds got 9 incredible innings from Homer Bailey last night, but will need to restart the game today from the bottom of the ninth with the meat of the order up. Let's really, really, hope that the Phillies punt it because the bullpen does not need any more work, especially with Leake and Cingrani (who, even if he's lights-out will have a pitchcount) coming up. Play starts at 5:30 ET, before the 7:10 nightcap, so lets hope it gets wrapped up quick for everyone's sake.

I'm really starting to worry about the bullpen, this is a lot of innings early on. Hopefully there'll be a streak of games later in the year where the Reds can just get 7-inning starts and blowouts to make things easy, because I have no clue how else people are going to contribute.

The Reds' biggest concerns this year were probably outfield depth and bullpen usage. Well, here we are two weeks in. Let's hope the narrative changes.

Baker is either maddening or Gets It. He says he won't use Chapman for four-out saves now, but hedges it by saying that he may get more creative later in the season. Is he counting on us forgetting, or is he genuinely hoping to get creative with his bullpen usage in July and August? I have no idea. You don't either. Hooray.

Also in that link is a mention that Jay Bruce bought a field in Batavia Township in memory of Brian Wilson, the Reds scout who signed him, Ondrusek, LeCure, and Stubbs. Brian Wilson was basically the mayor of Texas. "It's a nice token of appreciation to Brian and his family, and his efforts. But it doesn't begin to explain the effect he had on me and the Reds organization in general." Bruce said. Bruce is really just the nicest dude.

Ludwick is rehabbin' and not like Tiger Woods was rehabbin' either, despite the "second wife" jokes. There's some nice detail in there as Ludwick explains how his swing isn't affected so much, which we discussed earlier. Ludwick's level swing means that he doesn't have to generate much strength from that shoulder unlike other players. Interesting science-y stuff.

Joey Votto has three more walks than the Chicago White Sox. What a silly sport. 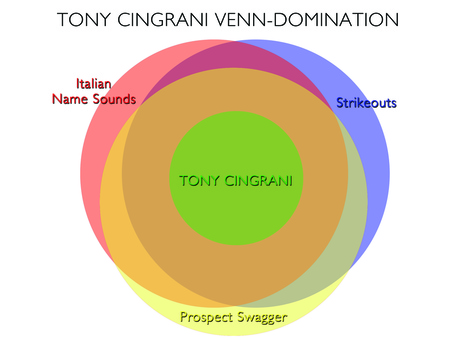 NotGraphs is kind of stupid, sure, but it's the good kind of stupid. I think everyone is excited for this redoubtable redebut Thursday.

Okay, go Reds today, folks. And in the least possible number of innings.