That was the least fun weekend to be a Reds fan that I can think of for a long time. It's only April, but there's something about this team that's inspired just complete hopelessness so far. From two key injuries, to inconsistencies by some key lineup performers, to some questionable bullpen management, the first 12 games of this year have felt like 112.

The beauty of this? Nowhere to go but up. Tonight starts a homestand which should prove easier than the one that began the season, and while he's not the most talented guy in the rotation, Bronson Arroyo bleeds consistency, and that's what the team needs right now. I'm looking forward to seeing what he can do tonight.

Of course, it's a tall ask to do this against Cliff Lee. But I ain't afraid of no Cliff Lee, are you?

When your bullpen is a bit taxed, particularly the long relievers, a sudden injury to your greatest innings eater is not what the doctor ordered. Even if the Reds are not in a save situation today, Aroldis Chapman and Jonathan Broxton may be expected to pitch. With both Hoover and Aldredo Simon getting the J.J. Hoover Treatment, Brian Price's two best bullpen horses will likely complement Sam LeCure today if Mat Latos doesn't go nine innings. Regardless, I hope I do not have to label any of these fine gentlemen as "Hard Luck Losers" later this afternoon.

If healthy, Sam LeCure will likely be the first guy called upon today, no matter the situation. Outside of Simon, most everybody else should be available. Broxton might get some time depending on the situation to redeem himself from last night's debacle.

All of that being said, it's 5 in a row, which means it's been another rough night for this little bugger. 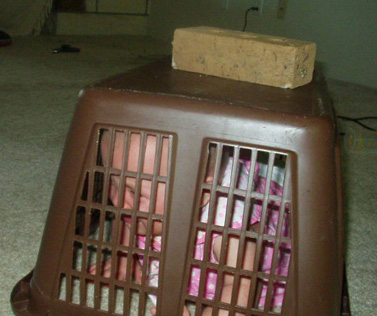 You don't want this on your conscience, do you Redlegs? Better win tonight.