Unfortunately, the injuries . . . and the bats.

In a game where nobody else on the team could drive runs in, tonight's Star of the Game goes to Zack Cozart. Not only did Cozart break his tenure as The Kid Who Only Hits Home Runs by hitting a single and a double, but also had a solo shot accounting for the Reds' lone run. With Brandon Phillips mourning the loss of his grandfather, and Joey Votto walking three times, there were few other Reds able to hoist up the flag to overcome the premature loss of Johnny Cueto.

Cozart took advantage of the fastballs thrown to batters immediately preceding Joey Votto and ripped each payoff pitch to a different area of the park. I would like to think that this was Cozart breaking out of his slump, but then I also thought the Reds win on Monday was evidence that they'd just run away with the division by the end of May. Whoops. Instead, here's to hoping that Cozart is on his way to a repeat performance of 2012 in whatever spot Dusty bats him.

Outside of the periodic walks and hard hits by Jay Bruce and Cozart, there weren't a heckuva lot of bright spots in the Reds' lineup. Unfortunately, it appears that we may now have to revisit the "One Run Reds" monicker bestowed upon this team from years past.

Since nobody in the everyday eight deserves a hat-tip, I'll just award it to J.J. Hoover who managed to pitch another 1.2 innings without having his arm fall off. Meanwhile, Alfredo Simon was a bit of a hard-luck loser and pitched relatively well considering the circumstances with Cueto's injury. 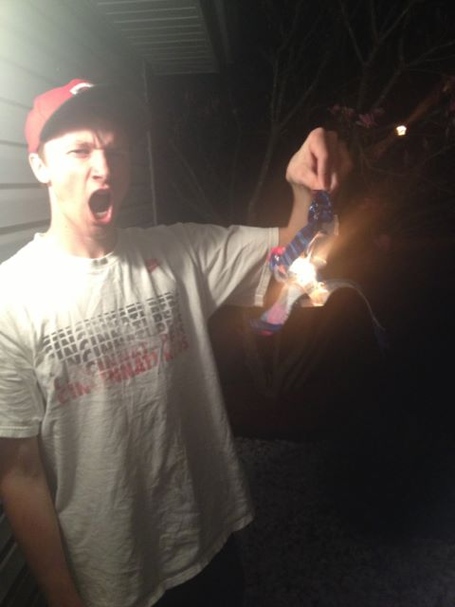