The Reds head to Pittsburgh to take on the Pirates. A look at the match-up...

Share All sharing options for: Series Preview: Reds at Pirates

After an off-day yesterday, the Reds begin a 3-game weekend series with the Pittsburgh Pirates tonight. The Reds enter the series with a 5-4 record, tied for first in the division. The Pirates are off to a slow start, with a 3-6 record. 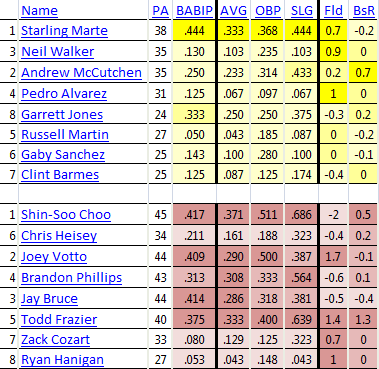 The Pirates are really struggling at the plate. They currently rank as baseball's worst team in AVG, OBP, and SLG. As a team, they have 2 HRs on the season. The only regular with not-horrendous numbers is Starling Marte, thanks to a ridiculous BABIP. The Reds on the other hand are hitting the ball quite well. Most of the regulars are contributing solid numbers. Heisey, Cozart and Hanigan have struggled to start the season, but everyone else is off to good-to-great start.

The benches for each team have yet to accumulate the number of plate appearances to draw any sort of conclusions. Still, based on the tiny sample size, the Reds yet again seem to have the advantage offensively. Xavier Paul, as we noted this week, is not too shabby.

While their bats have struggled mightily, the Pirates' pitching has been acceptable. On the young season, the Pirates rank in top 10 among all MLB teams in ERA and WHIP. A.J. Burnett has been a strike-out machine in two appearances, while walking his fair share of batters. The Reds will counter tonight with Mike Leake. While not terrible, Leake got a no decision after giving up 4 runs in 6 IP against the Nationals. After Burnett, the Reds will face Jay Bruce's kryptonite: Wandy Rodriguez. Rodriguez is one of those guys who seems to always pitch well despite mediocre stuff. Cueto will get the start against Rodrguez hoping to continue his strong start to the season. In just 2 games and 13 IP, Cueto has racked up 15 Ks. The series will conclude with Mat Latos facing James McDonald. Like Rodriguez, McDonald has benefited from a ridiculously low opposing BABIP. 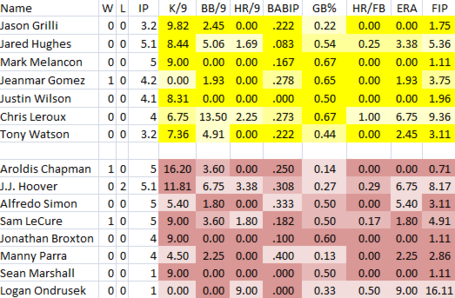 Both pens have been solid to this point, with just a couple of poor performances. The loss of Sean Marshall is a costly one. One could make the case that he is the Reds best reliever when healthy. The Pirates have used (abused) righty Jared Hughes as much as the Reds have leaned on J.J. Hoover. LHPs Tony Watson and Justin Wilson figured to see some action this weekend, serving as the "pitch-to-Votto-walk-Phillips-pitch-to-Bruce" late inning lefties.

The Pirates' lack of offense gives the Reds a clear advantage in this series. Aside from tonight's match-up, the starting pitching favors the Reds as well. Anything short of 2 wins should be a disappointing series for the Reds. If Leake can pitch adequately, the Reds first sweep of the season could result.