It's a day game rubber match, which are always fun. Here's what's the scuttlebutt as you settle in.

Jake Westbrook is actually pretty mediocre against the Reds for his career, but he held them to a .231/.310/.250 last year. Heisey's had some success against him, with three dingers in twelve at-bats, but the rest is pretty weak.

C-ing Trent Rosencrans explains the Mesoraco sitch. Basically, he says to chill out. Mesoraco will be catching Bailey today. His blog is actually pretty rad, he gets into noting that the Reds had three double-flapped helmets yesterday (Arroyo, Choo, who prefers to go by Choo, and Derrick Robinson) and links to the great Burwell column on Beeperino. I daresay that we got competition. /snarls

Erardi and Slyde have a fun photocle on Choo and worse defenders. Yes, Dunn is Kevin Mitchell make an appearance. Alex Johnson seems like the kind of guy I would love, a high-average snide motherfucker. Turns out he couldn't field. Still, check out his retort to Nuxhall in Slyde's slides. Also, I can't let a Kal Daniels reference go by without showing everyone my favorite picture in the world. 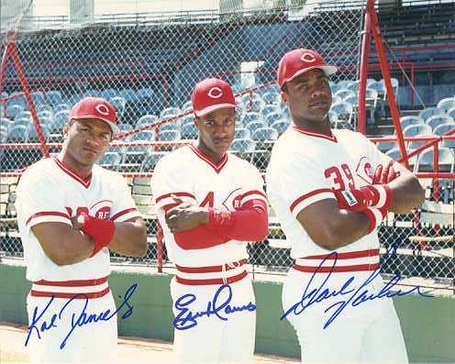 Also in that link is some nice stuff about Heisey, Robinson, and BP on the WBC. There is also some maddening stuff about Marshall.We're still a little worried about Marshall. He's not right yet...we waited as long as we could with an 11-man pitching staff." Someone some day has to figure out what's with this team and the disabled list. Sheldon helpfully notes that "Because Marshall pitched Sunday, the Reds wouldn't be able to back date a disabled-list stint very long." Let's hope Bailey can go seven-strong today,

I give ESPN just a ton of grief, but this Robert Sanchez story on Max Scherzer and his brother's suicide is, at least for me, truly tear-jerking. Mental health is something serious, frightening, and altogether mystifying. I have no idea.

And to keep the corporate thing going, here's Brisbee on strike/walkout ratios and their growing irrelevancy. I thought it was interesting in light of -MBP's comments about the incredible ratios of Bob Steve and Cinnerman. Basically, K/BB ratios are growing league-wide, and any MLB prospect pitcher is going to have elevated rates. So it's become less useful as an index of "how good is this pitcher?" and batters with elevated strikeout rates are no longer risks. In short, the game of baseball is changing as players are more willing to strikeout if it means a bit more walks (from longer pitch counts) and a bunch more power. My solution is to make K/BB+ a thing: a pitcher's K/BB as compared to the league average through the years and through the levels. I think this makes sense. I'm making it up as I go along.

Speaking of making it up as I go along

I tried to change the font size to match the comments size. Did it work for you? Are you cool with it, or want it changed back?