Ladies and Gentlemen, This is Your Team

We have left the deserts of winter and welcome spring with a familiar crew.

Share All sharing options for: Ladies and Gentlemen, This is Your Team

Because this is 2013, the Reds' 25-man roster was announced via Facebook: 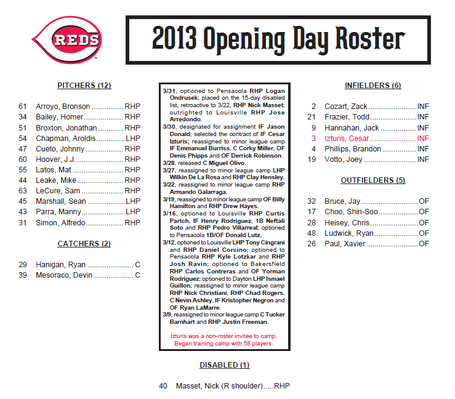 Which, the first and most important thing to note, is that it is not permanent. Besides 2011, when every single player the Reds used began the year in the organization, there is always some flux and shift. The Reds will use more than 13 position players and more than 12 pitchers. Just because we have twenty five last names now doesn't mean we can shutter out the rest of the goings-on.

Like an empire that commands all known realms, the Reds are favored to win the division this year. I can distinctly remember the last time the Reds were generally considered favorites to win the division. 2000. I remember getting my SI baseball preview and seeing the Reds on top of five other teams on the strength of a 30-year-old lefty centerfielder and a killer bullpen. And it's not that history repeats itself as much as history tells us stories to make us better tomorrow.

But tomorrow is now here. This is a much better team than 2000, and shortstop is honestly the only position where I'd take my teenage heroes over my mid-20s heroes. But the point remains...the Reds haven't won anything yet, the Pirates really and completely justifiably hate the Reds, the Brewers can still hit, and the Cardinals have still not learned humility. The season is dark and full of wonders and terrors, and ain't nobody ever won shit in March.

It is easy to get caught up in the numbers, the predictions, and the data. Especially when it is pointing towards exactly what you want to hear. And I like numbers, I really do. But this game is a bit more exciting if you do more than just bet on red 162 times and get enraged when it comes up black, at least I think so. We have been given our set of 25 independent variables for today. Nothing they have done before today really matters. This process will be repeated, and Red Reporter and the sun are the only real constants throughout all of this. I'm excited to enjoy the 100-million-dollar equivalent of 25 monkeys on typewriters trying to write a better book than the other 25 monkeys. The ones we like are dressed better.

[unrelated, but in the course of Youtubing earlier this morning, I came across some good Crosley-era stuff. Including a tour of current Crosley, mini-Crosley, Photo Day; 1970, and Teddy Klu and a young Frank Robinson on What's My Line. And of course, the My Oh My remake.]

[oh dang, I tried to edit this, than changed my mind. I don't even know what is going to show any more. Who cares. Go Reds! It's Opening Day!]