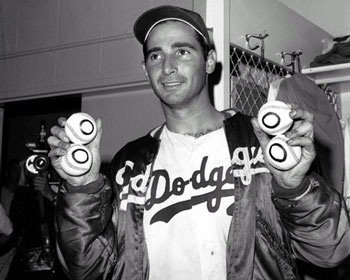 Hey gang. Duder here. El Duderino, y'know, if you're not into the whole brevity thing. I was one of the authors of the Port Huron Statement. The original, not the compromised second draft.

Ever hear of the Seattle Seven? That was me...and six other guys.

Whatever, man. I'll tell you what I'm blathering about. New shit has come to light, man. You guys aren't privy to all the new shit, but that's what you pay me for, man.

See, the Dodgers, y'know, the LA Dodgers...well, man, see they got bought by Magic and some of Maude's friends, and now they're all, y'know, just throwing money around like it was dirty undies. Crazy, man. It's like they got all tired of the Giants and their aggression, man, and decided that just would not stand. I bet Lasorda's happy, man.

The way I see it, man, the Giants had all that good pitching, so the Dodgers wanted a lot of guys who could hit it, y'know? I still can't quite figure it out. There's a lotta ins, lotta outs, lotta what-have-yous...lotta strands in ol' Duder's head. They've got that one guy, Kemp. He can fuckin' roll, man. That other guy, Ramirez I think, well, man...do you have any Kahlua? Ramirez. Yeah. I mean, I know lazy, but man, he might be the laziest in Los Angeles, which puts him in the running for laziest worldwide, man. He can play though, man. He can fuckin' play. And Gonzalez. That guy fuckin' walks. I've never been more sure of anything in my life. Man, the three of them together, man, that's a fuckin' ingenious plan. It's a Swiss watch.

They've got like, I dunno, nine pitchers, though. Who knows how to figure that out. This could be, uh, a lot more, uh, uhh, complex, I mean, it's not just, it might not be just a simple, uh, y'know? Sounds exhausting. I dunno. I can't be worried about that shit. Life goes on, man.

I'm just waiting to find out there was really no money in the briefcase, man. I've seen that shit before. Like they're still really owned by that dude and that lady. She owes money all over town, man. They've gotta feed the monkey, man...hasn't that ever occurred to you? Like they've just been in seclusion in the West wing this whole time just, y'know, just listening to the fuckin' Eagles and laughing at us. Fuckin' A!

Whatever, man. Nothing is fucked here, y'know, in the parlance of our times. Greinke and that guy Kershaw are gonna fuckin' roll, man, whether it breaks the bank or not. That's just how this whole baseball thing goes, man. One year you're broke, the next you've got all the money in the world. Strikes and gutters, man. Ups and downs. Just never do know what condition they're in.

So that's about that, man. The old man said I could take any rug in the house if I told ya all about his Dodgers, man, as long as I had it done by the end of the wee...is this a...what day is this? I need to find those Creedence tapes. Karl Hungus, man.