A truck rumbles forward onto a cracked, blacktopped parking lot. The roar of a motorcycle is off in the distance. The truck stops. The passenger door swings open and a cowboy boot enters the frame stepping onto the ground below

Rick: This should work.

Glenn: Here? Seriously? You want to look for rations and weapons here?

Rick: There ought to be plenty of bats.

Rick: So are the streets.

The motorcycle roar rises as the chopper approaches. It barks and stutters before the engine is cut.

Daryl: You’re out of your damn mind.

Rick: Not any more than you driving around on that loud-assed thing. How come walkers are attracted to noise yet they never seem to come after you on that bike?

Glenn: I’ll head back and get the others. But I want it known I’m not a fan of this idea.

Glenn backs the truck out and leaves. Daryl and Rick look up and stare at the dilapidated building. The letters T NER F LD are all that remain of the sign atop of the façade. 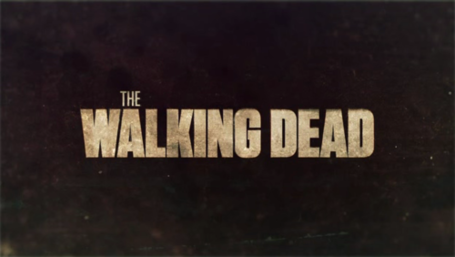 Daryl: We should probably take a look around before the rest get here.

The two men walk through a turnstile. Wrappers and debris litter the ground. Concession stands are in disarray. The entire concourse of the ballpark looks as if a mob of wild animals has ravished it.

Daryl: Not sure there’s going to be much food here. Looks like it’s been looted plenty.

A groaning noise emanates from behind the two men. They turn.

Daryl shoots him in the face with an arrow from his crossbow.

Daryl: All the Lasik in the world and the dude still couldn’t dodge one up and in.

Rick: Guy could reach base though. Not bad for a slow, fat catcher.

Glenn speeds the truck full of other survivors down the dusty highway in the direction of the stadium. The group is eager to reach their destination, but also on edge due to the surprises that are sure to await them.

Dale: I think Rick’s gone crazy, running around at a ball field with walkers all over the place. This isn’t the time to relive your boyhood fantasies.

Glenn: I know Dale. He told me to bring you guys so I’m bringing you.

Lori: But what about the baseball players’ feelings Glenn, have we stopped to think about those?

Everyone: Shut up, Carl.

Back at the stadium, Rick and Daryl find themselves in the batting cages below the stadium.

Daryl: Rick there’s enough bats left here we could go for months without having to use ammo.

Rick: That’s what I was hoping for.

A groan echoes throughout the cavernous inside of the stadium. Daryl points his flashlight toward the back of one of the cages. There, four zombies are ensnared in the net of the mesh batting cage.

Rick turns to face the walkers while pulling out one of the many portable pitching machines leaning against the wall.

Daryl: Only one way to find out.

Rick drops a ball into the machine. The sphere whizzes across the room and smashes the very broad frontal lobe of Dan Uggla. Zombie Uggla stops moving.

Daryl: That guy could always hit but couldn’t field worth a crap. Can I try?

Daryl: I have no idea who that skinny boy is.

Daryl drops a ball into the machine. It pings off of Simmons’ noggin and lodges itself into the back of Freddie Freeman’s head.

Daryl: Yeah, that’s too bad. I always liked Freddie. Hey, who’s that fat boy still thrashing around in that net.

Rick: Oh him? Eh, we can leave him there. He’s going nowhere just like his OBP.

Glenn: Okay, they’re probably inside taking a look at the place. Dale and Andrea come with me. Lori here’s a radio. Stay here and wait for the rest of the group.

Lori: No Carl, you stay right here. This isn’t a world for children and there’s no way I can keep you safe as far along as I am. I know I’m being overprotective, but you need to stay right here.

Dale, Andrea and Glenn head toward the turnstiles. Just as they are about to enter a booming voice comes over the stadium’s PA system:

DON’T TAKE ANOTHER STEP! YOU ARE ON MY LAND! I AM THE GOVERNOR!

Through the concourse, past the crumbling poles of the stadium, they can see the Jumbotron. On it is their worst nightmare. 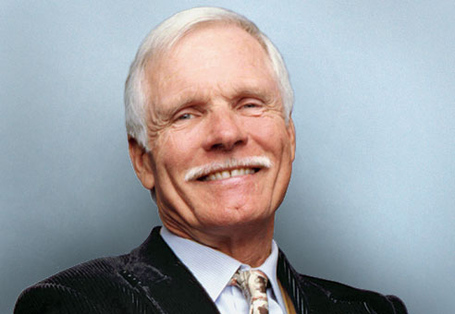 In the owner’s suite at T NER F LD, Ted Turner sits stroking the hair of a zombie Jane Fonda. Captured, Rick and Daryl are tied to chairs, the remaining survivors are sitting on the ground - their heads down as the entire Braves pitching staff stands in a circle around the group, rifles pointed.

Governor: Now, I’m a very compassionate person. I understand the plight of the common man. So I can understand your struggles. You’re welcome to stay here and be a part of my community but you can only do so while following my rules. MY. RULES.

Daryl: How the hell did you even get back here man? Don’t you live in Montana or something? You sold the team years ago, didn’t you?

Governor: Enough, these are not things you need to know. Tim, take him away.

Daryl: You stay away from me Tim Hudson! You aren’t half the pitcher you used to be.

Everybody: Shut up, you two!

Dale: (under his breath) The kid kind of has a point.

Governor: Enough of this! Tim, take Jane back to her room. Paul, go feed the Upton brothers. Use whatever’s left of Janish. Those boys are hungry and our ticket to winning another division title! Julio, Mike, Kris take these fools outside and execute them. Then chop them up and feed them to Heyward. He and Kimbrel are out back finishing off Gerald Laird.

Tim Hudson: What do you want us to do with Brandon Beachy?

Governor: Have him and Reed Johnson fight to the death. The loser is fed to Jonny Venters.

There’s a knock on the door. Without waiting for a response, the door is opened.

Bobby Cox: No, I just look like this. Uh, Ted, Governor, we have a problem.

Governor: No we don’t, I had Fredi Gonzalez killed and put you back in charge.

At that moment, Bobby Cox lets out a scream and slinks to the floor. Zombie Chipper Jones stands in the doorway.

Governor: DAMNIT! You ass! You won me just one Series and now you’re back to antagonize me again!

Zombie Chipper rips Hudson’s throat out; the room falls into madness. The survivors sneak out of the room as the Governor and his goons fend off Zombie Chipper.

T-Dog: Damn man that was close.

Dale: When did you get here?

T-Dog: Damnit man, I’ve been here the whole time. I’m always here. None of you jerks ever let me talk.

The survivors make it back to their vehicles as the screams begin to die down upstairs. As Rick throws the final bit of loot into the bed of the truck a growl comes from the turnstile entrance.

Rick: Carl, take care of that will ya son? 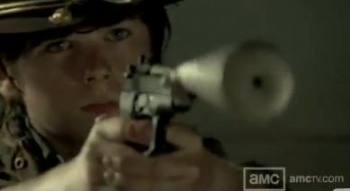