EASTER? I HARDLY EVEN KNOW HER! Edition

Oh, sure, now you come back. After your football team loses in the first round of the playoffs (again). After your hockey team decides it’d be really cool to only work six months out of the year (who do they think they are? Teachers?). After your college basketball team: loses their conference (no, not their conference tournament, their ACTUAL conference), fails to make the NIT, loses in the first round of the NIT, or loses to a team that derives its name from "the shocker."

Pardon us for being bitter about everything and anything that comes our way as Cincinnati sports fans. Hatred andf anger are just about the only things that gets us through the winter. It's the fatty coating that permits us to hibernate. That’s why we have to rely on awful and heavy-handed sportswriters to make it feel like there are others suffering more than us. That's why we're grateful for Paul Daugherty. We're grateful for Tim McCarver. Heck, we're also grateful for Jim Day, and idiotic Twitter accounts. If they can be so miserable when the going is good, they must be close to death when bad things happen. That's why every week here at RIWIAW is a celebration of hatred and pain. We love all of you. Happy Easter.

Monday: A Children’s Treasury of Tweets From Someone Who Devotes His Twitter to Hating Dusty Baker (Sometimes Through Obscenity and Mildly-Veiled Racism).

Dusty on Olivo "sometimes, contractual things supersede. They preclude what you want to do." WANT to do? Like, u wanted to keep him? SMDH.

Tuesday: McCarver? We Hardly Even Knew Her!

Most national baseball broadcasts are unlistenable. Even if you’re fairly decent at your job, you’re going to get plenty of unwarranted criticism; regardless if you're a beloved athlete. That’s why we here at RIWIAW were surprised at the lack of celebration over Tim McCarver leaving his post at Fox. Known to cause ire on Twitter, McCarver has also developed a reputation over the years for delivering frequent non-sequiturs during national broadcasts. Sure, it may be good news that Tim McCarver is likely to be replaced by someone else, but the bad news is that Joe Buck is staying right where he is and will be even less inclined to pause and allow his co-host to speak. You win some, you lose some more, America.

Wednesday: A Big Boy with Tarter? I hardly even knew her!

People eat at ballparks because they’re hungry and they have no other choice but to eat there. The supply and demand curve indicates that since people cannot leave and re-enter the park, they’ll pay just about anything for food if they are hungry. That's why all food at the ballpark is egregiously overpriced.. Meanwhile, people eat at Frisch’s Big Boy because it is cheap. Not because it is good. Not because it is satisfying. Not because it is healthy. Because it’s the least expensive out of all other alternatives. Therefore, if someone created an overpriced Big Boy, it would be illogical for someone to order it. That’s why we here at RIWIAW were perplexed that it is newsworthy that people can now purchase Big Boy hamburgers at GABP. We’re not exactly sure what the difference a Big Boy hamburger is from asking the concessions guy to slide a few tarter sauce packets under the table to go with the horsemeat patty you’re wolfing down already. The only silver lining in this news is that Johnny Rockets no longer has the worst or most-overpriced hamburger on The Banks. Enjoy it!

Thursday: Closer? I Hardly Even Know Her!

Whether you were Team Closer or Team Rotation this past offseason in the sickeningly prolonged Arolids Chapman debate, you were at least relieved with the closure to the issue brought last week when it was determined that Chapman would remain the closer. However, some pro-rotation zealots have decided to make this an issue during the regular season. GRAND! Regardless of how the Reds 2013 season goes, the Chapman saga will continue to be questioned by the likes of Paul Daugherty for the NEXT SEVEN MONTHS. That is, unless Chapman becomes the most valuable player on the team. If that occurs, Daugherty may do his best to sweep his past comments under the rug. 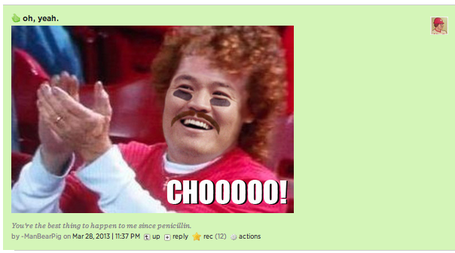 Saturday: Boras? She Hardly Even Knew Us!

CBS Sports released their expert predictions for the 2013 season today. While a majority of the writers predicted that the Reds would win the NL Central, Jon Heyman’s predictions suggest that the Reds would not even make one of the NL wildcard spots. While we here in Redsland may have unreasonably high expectations, we feel that this omission requires at least an explanation from Heyman why this season will go down in flames. The team won over 95 games in 2012 and lost about 160 strikeouts in the offseason. Heyman's silence on the Reds is, on the surface, perplexing. In fact, we’re almost positive that Heyman has only written one sentence about the Reds this offseason; mentioning that both Chapman and Shin Soo Choo will be playing for them. But, we guess that's what is expected when you’re last in the league in terms of Scott Boras clients.