A number of sites have rolled out their final projections and predictions for the upcoming season.

Share All sharing options for: Red Reposter: Rounding up the division previews

Jason Linden wraps up the Nation's preseason breakdown of the Reds. The site's predictions see a substantial improvement across the club in terms of WAR. Shin-Soo Choo has the largest projected improvement, going from one win to four wins. As Linden points out, a hefty portion of the team-wide increase comes from trimming players like Scott Rolen and Miguel Cairo off of the roster.

Zeldink outlines the many activities planned for next week's game. This article serves as a handy reference if you're attending one of the first two ballgames.

Sports Illustrated's baseball writers predict the division races, award winners, and season surprises. Of the seven columnists, six picked the Reds to win the NL Central while the other has Cincinnati as the second wild card. Five of the seven also picked Joey Votto as the NL MVP.

19 of the 20 MLB.com experts picked the Reds to win the NL Central. Richard Justice, the lone dissenter, predicts that Cincinnati will win the first wild card spot.

SG's annual preseason column at the Replacement Level Yankees Weblog (RLYW) is one of my favorite yearly pieces. He aggregates the projections of five prominent systems to give us a veritable bouillabaisse of statistical baseball goodness. The systems simulates hundreds of thousands of seasons using an aggregate of ZiPS, CAIRO (RLYW's own projections), Marcel, Oliver, and Steamer. The projected 2013 Reds won an average of 89 wins and took home the division title 41% of the time. I highly recommend clicking through to peruse all of the projected standings, but I have included the NL Central's pie chart below. The percentages represent the frequency with which each team won the division in the simulations. 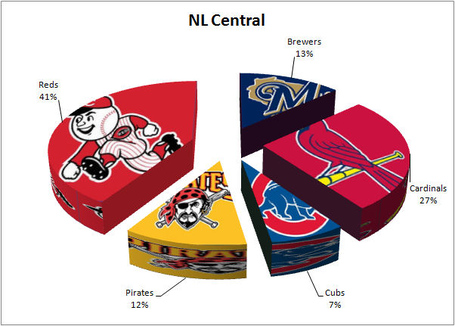 You can find the podcast on the iTunes store or follow the link that Rany posted on Twitter. The podcast is nearly two hours long and while I enjoyed the entire show, the NL Central preview starts around the 28 minute mark for those of you who have less time to listen.

Establishing A Mendoza Line For OBP

Andromache searches for OBP's corollary to the infamous .200 batting average. I've seen the term "Bowa Barrier" used for a .300 OBP, but Andromache finds that the Bowa Barrier might be too high.

Detroit signed its ace to a seven-year, $180 million extension that keeps him in Detroit through the 2019 season. The Tigers already had Verlander under control through the end of the 2014 season, so this really adds five years to the end of his current contract. Verlander is a phenomenal pitcher, but inking a pitcher to a mega-deal two years out seems like a huge gamble to me.

The extension will keep Goldschmidt in Arizona through 2017. Goldschmidt's GRIT+ last season was a healthy 132. GRIT+ measures a player's grit, but adjusts for size, strength, natural ability, and position. While Goldschmidt doesn't seem that gritty, first basemen are notoriously known for blasting home runs rather than laying down sacrifice bunts and playing aggressively, so he does well in comparison.