Call me when we start to move beyond the Herb Score.

The big news today is that Mesoraco is going to be the second catcher on this team. Of course, you and I both knew that a month or two ago, but there's no other news this late in Spring Training, which by the way is a really good thing. Olivo is by all counts a good dude. His contract says that he gets $100K if he stays in Louisville, or he can decide to become a free agent. He'll most likely look to see if he can get a backup job elsewhere, since Louisville really doesn't need two different good-guy veteran backstops along with Mark Fleury/whoever else they have down there.

Baker's weirdly passive-agressive about Mesoraco, saying "It's not like Mesoraco didn't earn it," and "You hope he's gotten to the point where he's mature enough where he realizes it's only a bad game and then you forget about it and don't dwell on it." There's no doubt that the Golem is a bit of a firecracker, so let's hope that he's able to channel that into the bat only this upcoming year.

Also in that Establishment News link: Hoover sounds pretty non-chalant about his position in the roster. He gets that he has options and Simon/Parra/Ondrusek don't. He's probably the first man up in the bullpen on I-75, which shouldn't be too much of a shock. Baker also said that Speier is going to be the third-base coach this year. He was previously Baker's 3b coach in Chicago, and is by all counts Chris Speier. They haven't seemed to make a decision on whether Berry will be on the bench all year, or only on homestands, or what. I have no idea what the MLB ruling on this is, but my guess is that Berry takes some sort of vague "advisory role" to keep him on payroll. We'll see.

Cueto went 6IP, 5H, 0ER yesterday, with a single and a run scored. He says he feels good. Samardzija has lots of nice things to say about Cueto and how Johnny plays with a smile on his face. The only run the Cubs scored was Nice Dog, ken! Castillo. So yeah, both the Cubs and Reds are in midseason form on that front.

Dave Clark has a nice preview of Angels minutae of Anaheim. Josh Hamilton has faced every MLB team besides the Reds. Jerome Williams is a) still around b) Hawai'ian c) RT'ed Geoff Blum, in 2013 and not 2003, d) is an ex-Baker pitcher on one of my favorite Cubs train wrecks, 2005. The team wastes a Vottonian year from Derrek Lee by i) 609 Neifi Perez PAs, ii) playing Todd Hollandsworth, Jeremy Burnitz, and Corey Patterson over a 23-yo Matt Murton iii) Michael Barrett, post-Oswalt fight but pre-AJ and Z fights, is clearly a misunderstood white knight of baseball, iv) Mark Prior getting drilled in the forearm by a line drive. Gosh, the mid-decade Cubs were so much fun to laugh at.

Speaking of mid-decade, here's a bunch of pictures of Young Shane Larkin with your favorite mediocre Reds. Deion Sanders sighting!

The Astros found the only good use of those armpit-panel-sorta-thingies. I think I'm really going to grow to like their look. 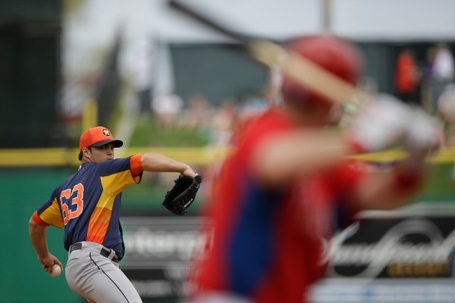 Redesigning the chess set is actually really fascinating and full of good photography.

The conversation that led to Indiana Jones is fun to read.

My new favorite name in history, and you know I care about favorite names in history. Watch for Jon Bois to be making jokes about my boy Hye-Ro in three weeks or so.

Who makes more starts for the Reds this season? 1) Cingrani 2) Corcino 3) Chapman 4) Parra 5) Gallaraga 6) Villareal or 7) Other and why do you think so?