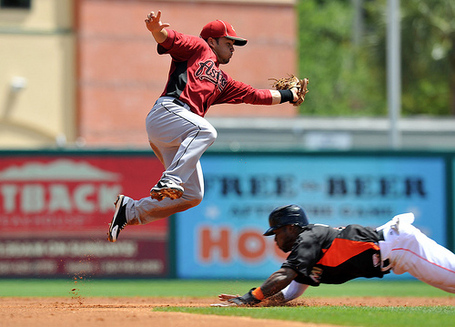 Hi, all. I'm Lance Armstrong. Winner of 7 Tours de France the 1998 Tour of Luxemboug and 1996 La Fleche Wallonne! I recently taped this interview about the Houston Astros with my good friend Oprah Winfrey, but for some reason, she refused to air it on her network. So, I thought, who better to share this with than a bunch of internet commenters at a blog for a team that's not even in the same division as the Astros anymore? I knew you'd agree. I know you'll also agree that I totally won at this interview, like I win at everything. 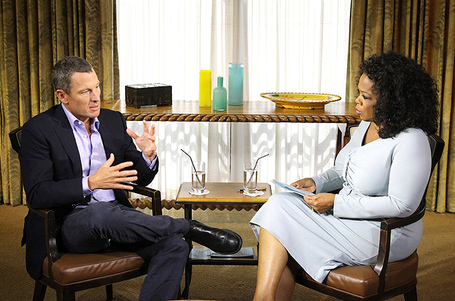 Oprah: Hi, Lance. It's great to have you back on the show. But when you asked to come back, you said you wanted to talk about something a little different than your last interview.

Oprah: The Astros? Why the Astros?

Lance: One, I just want to support the community. If there's anything that Lance Armstrong is associated with, it's supporting his local community. Two, the Astros have a great story, a really great story. Some individuals have been pretty terrible things about the Astros lately, but I know that if people would just give them a chance, they could have

a really awesome comeback this year.

Lance: Yeah, people are mad at the Astros because they lost a lot of games. Like, a lot of games. An ungodly amount of games. And you know, that's hard for me to understand, because I'm pretty used to winning, not losing, like the Astros. But then I heard someone say that losing over 100 games in a season is sort of like winning 7 Tour de Frances, and then having them vacated because you did a shit ton of steroids, and since then, I've become a lot more sympathetic to the Astros.

Oprah: So people are being overly harsh, you think?

Lance: Absolutely. It's just so short-sighted. People get so obsessed about the losing, and they just forget everything else. Like, how the Astros struggled to beat Brandon Phillips. Or how they won 7 Tours de France and raised millions of dollars for cancer awareness.

Oprah: You don't actually know anything about the Houston Astros, do you Lance?

Lance: Of course I do! For instance, they've got a great young second baseman named Jose Altuve. Altuve reminds me a lot of me when I won my first Tour de France. Young, promising, and unlimited potential and success in his near future.

Oprah: Anyone else you know on the roster?

Lance: Well, they're giving Rick Ankiel a look in center field in spring training. Rick Ankiel has had to completely restart after injury ended his pitching career. Switching from a pitcher to a position player is a pretty big challenge, like moving on to triathlons from cycling. I really respect that, and think that bitter, grudge-holding quasi-governmental agencies should get out of the way and let it happen. I was also surprised to hear that Carlos Pena is with the Houston Astros, mostly because I forget that he exists. He's got some good career numbers, but without any palmares his career is utterly meaningless, now.

Oprah: ….Ok, what about pitchers? I've heard baseball teams need pitchers. Do the Astros have any?

Lance: Lucas Harrell and Bud Norris are the only returning starters from the 2012 team. Harrell and Norris may not be the most exciting pair of players to anchor your rotation, but Norris did have a 1.71 home ERA last year. Plus, every team needs its domestiques – you know, guys who are always there, doing great work, not in the spotlight. You just have to hope they don't STAB YOU IN THE BACK. CoughcoughGEORGEcoughcough.

Oh, and Erik Bedard will have a chance to make the rotation. Bedard reminds me a lot of me coming back to the Tour in 2009. Sure, he's old, and not as good anymore, but he used to be good, and that's really what matters.

Oprah: What would you say the biggest key to the Astros' 2013 season is?

Lance: I think that would be their new manager, Bo Porter. Porter has quite a job in front of him, with this young team. I know first hand how important a manager can be, you know to make sure everyone's on the same page in terms of "winning attitude", and wrangling French ADA officials, you know, manager stuff.

Oprah: Audible sigh. Any last words about the Astros?

Lance: Basically, everyone should just forgive the Astros and move on. All the Astros want to do is re-start their career in the AL West, and the good people of this nation should accept that so they can go on to make more money.