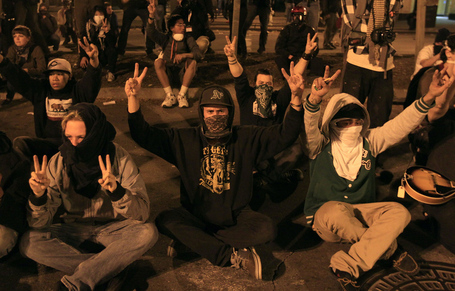 They say that fame brings you everything you could want. They say it makes you immortal. They say a lot of things. They are stupid.

Jerry looks up at me, his jaw hangs like a porch swing from the side of his face.

"Close your mouth, Jerry. You sound like a retard in heat."

Outside the suite, heavy metal music blares from the stadium’s speakers. Grant Balfour charges out of the bullpen toward the mound. A sea of green and yellow thrashes in the stands. It’s damn near anarchy. It’s damn near perfect. It’s damn near magic.

And that’s what they say Oakland is: damn near.

But fuck they. I know Oakland.

And I am Oakland’s conscience, telling it to take the condom off as it mounts your back side.

I am Oakland’s raging shim cock.

"I fucking hate you Hollywood types, you know that Jerry? I’m not Brad Pitt, Jerry. I never have been. You all want me to be. You all say that I am. But I’m not. You assholes can’t change me. None of you fuckers can change me."

Jerry looks back at me, his perfect Hollywood hair doesn’t move.

"Whatever Jerry, I’m going to take your division again."

I make the call. Place the offer. I hang up. I wait.

The phone rings. I answer.

"Give me Lowrie and Fernando Rodriguez," I say. "Then kill yourself."

"Yes, we can do that," I say. "Yes, great doing business with you and welcome to the AL West."

I hang up. Fucking amateurs.

The hallway from my office to the elevator is long. There are six other rooms between me and the elevator, I duck into one.

"Jonah," I say. "I want all the projected numbers and advanced reports on our outfielders: Coco, Yoenis, Reddick and Seth Smith. I want to know if it will be better to start Smith in the outfield or keep him at DH. I also want to know if Coco’s going to be worth running out there or if we’re better off calling up Michael Choice or Grant Green."

I nod. Walk away. I just made all that shit up. I don’t care about any of that, I know what I’m going to do. I just want to keep him working. That idiot is here "prepping" for Moneyball II. Actors are fucking stupid.

I look out my window. The division standings are listed in the outfield. The A’s sit in third. I grab my phone and call Jonah.

The starting rotation is crap. It has been since Brandon McCarthy went to Phoenix. Or Missoula. Or wherever the hell he went. I’m going to change that. I call Jonah.

"Get Brett Anderson, Jarrod Parker, Tim Millone, AJ Griffin and Dan Straily to my office in five minutes," I say.

"What about Bartolo Colon," he asks.

"Bring him up to date on Operation Fap," I say.

The pitchers arrive. They still suck.

"We’re in third and our offense is averaging 4.5 runs per game," I say. "You are pussies. You guys suck. We have three quality starts between you five and it’s August."

I stand up and walk to my closet. I open the door. Inside is Adam Rosales in a gimp suit.

"I just fed Adam a shit ton of PCP. Throw balls at him until you all get better."

They take Rosales and leave.

The pitching still sucks. Doesn’t matter, Operation Fap is going perfectly. The Angels and Rangers are tanking. Brandon Moss has started hitting. We’re finally getting production out of John Jaso and Hiroyuki Nakajima. Scott Sizemore and Jemile Weeks, on the other hand, continue to be genocides wearing cleats. Still, the A’s are rolling.

"Dead Mr. Beane. After the PCP we gave him meth. Yesterday he took a huge batch of crank, jumped off the Golden Gate Bridge."

"Of course," says the fat kid.

There’s a week to go in the season. I get a call from Jerry DiPoto. He is not pleased.

"Tell that fat kid from Knocked Up to quit calling my house at 4:30 AM while he's jerking off," he says. "I know you're behind this Beane. I know it! I also know Colon has been sending cocaine to Josh Hamilton’s house with notes that say, Remember Me?"

"I don’t know what you’re talking about, Jerry," I say.

"One of your assholes mailed this to my mother’s house," he says. "I called the cops, I said Billy Beane has been harassing me. They arrested Brad Pitt!"

"You people are idiots," I say.

"I’m tired of this shit Billy," he says. "Josh has been on and off the wagon all season. I can’t get any sleep. Someone keeps shitting in Mike Trout’s cleats and Albert Pujols keeps getting letters saying he’s a "trader.""

"That last one’s from Cardinals’ fans," I say.

"You’re full of shit," I say. "That’s what you want us to think it’s about. All of you. It’s bigger and more important than that. So is life. Take a look around you. Quit being so fucking stupid! Quit being what they want you to be!"

With that Jerry lunges at me. I dodge. He falls flat on his face and five pounds of flesh-like rubber enter his mouth and rip it wide open.

Outside, Balfour is called to the mound. Oakland erupts. And Hollywood is stuck with a dick in its mouth.