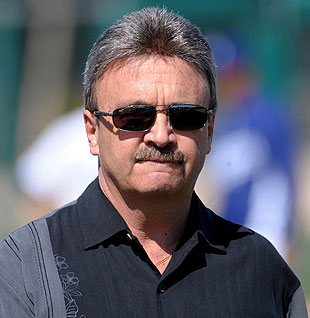 Ned Colletti: Hi Mr. McCourt. I signed Zach Greinke and Ryu Hyun-Jin yesterday. I know, I know, the market's depressed. Anyway, I already traded for Adrian Gonzalez, Josh Beckett, and Carl Crawford. Some things I have to do to catch San Francisco in the West. Things I couldn't do while you were here. Maybe you would have approved. Hell, I know you wouldn't have. (beat) I've tried everything and I can't seem to get their attention. But now they'll learn how it feels on the other side. Let's hope it elevates their thinking.

[Stanley Goodspeed is setting a hula doll on fire. His boss hands him a package.]

Goodspeed: Yes! She's here! Bring it to me now. Thank you, Phil!

Isherwood: What’s that? Why’d you get it sent here?

Isherwood: Carla’s right. Why don’t you just spend $130 on MLBTV?

Goodspeed: First of all, it’s because I’m a baseball maniac. And second, these seats are better.

Boss: A dog out of LAX caught a whiff of something in this package. Could be detergent, could be some of Tommy Lasorda’s undies that need detergent. You guys wanna get suited up?

Goodspeed: Let’s see. We’ve got some dirty magazines. Stone Age Cave Girls in the Raw. Kinky. And, uh… not a good sign. [holds up Brian Wilson’s beard. Isherwood grabs beard and playfully puts it over his face.]

Goodspeed: It hasn’t been washed since the Giants cut him. I want the exhaust!

Isherwood: It’s all over my hand!

Goodspeed: Where are my sprinklers?

[Sprinklers finally come on, and Goodspeed and Isherwood stagger out of the containment chamber.]

Goodspeed: I almost touched the hair of a Dodger!

Colletti: Manager, be advised. The NL West, I say again, the NL West is under my control as of this moment.

Bochy: Who is this?

Colletti: Mr. Director, you have a very serious problem. A battery of steroids is presently deployed to deliver a highly enhancing dose on the population of the San Francisco Bay Area. I will call again to state my demands.

Bochy: I want to know who I’m speaking to.

Worried Giants Staffer #1: Who do the Giants have that could be affected by steroids?

Worried Giants Staffer #2: There’s Buster Posey. I think he was a catcher at the time. Three years in the league, two World Series, one Rookie of the Year, one Most Valuable Player, one Silver Slugger, one Hank Aaron Award, and the Comeback Player of Jesus! The man’s an All-Star.

Colletti: How are you doing, Brian?

Neukom: I don’t know, Ned. Why don’t you tell me? Got a lot of very, very worried people here, Ned.

Colletti: I’ll come straight to the point. Six world championships have been won by the Dodgers, five since we moved to southern California.

Hayden Sinclair: Southern California? We never admitted that titles counted more when they were in California.

Colletti: Who is this? Identify yourself.

Colletti: How old are you, Chief of Staff Sinclair?

Colletti: Well, Mr. Sinclair, you’ve probably got no fucking idea what I’m talking about. By your ninth birthday, the Dodgers had won five World Series in thirty years and were the dominant team in California. The only team the Bay Area gave a shit about was the A’s. Brian, put some rigging tape over Mr. Sinclair’s mouth. He’s wasting my time.

Colletti: The Giants may have won two of the last three World Series, but the Dodgers have an ownership group worth a billion dollars and a payroll that will awe all others. They are to win the NL West this season, not San Francisco. Do I make myself clear? But it’s to look like a fair fight. You alert the media, I release a steroids story. You refuse to lose, I release a steroids story. I am aware of your countermeasure left fielder. You and I both know he doesn’t stand a chance. Colletti from AT&T Park, out.

Sabean: Our standard left fielder last season was Melky Cabrera. But Cabrera was suspended for fifty games last season after testing positive for steroids. Colletti knows this. Another steroids scandal and he’d be out of the game.

Sinclair: Is there any other option?

Bochy: There is someone who I think can help us.

Bochy: This is for divisional dominance!

Sabean: It’s divisional dominance that got us here in the first place twelve years ago! I knew! I knew someday this would come back to bite us. Forget it! He does not exist!

Bochy: He does exist! We just chose to forget him for six years.

Sabean: Fine! Let’s just pair him up with the biggest Giants fan there is.

[Stanley Goodspeed is entering the Giants dugout with Bruce Bochy]

Bochy: You come highly recommended. What do you know about steroids?

Goodspeed: Performance enhancer. Discovered by lousy Oakland player Jose Canseco. Um, it’s actually like champagne that way. They were both discovered in the 1989 A’s locker room. It’s very, very horrible, sir. It’s one of those things we wish we could disinvent.

Goodspeed: This isn’t a tour I won in a contest, is it, sir?

Bochy: No, Dr. Goodspeed, it’s not a tour you won in a contest.

[Bochy and Goodspeed step in front of two way mirror. On the other side sits Barry Bonds.] 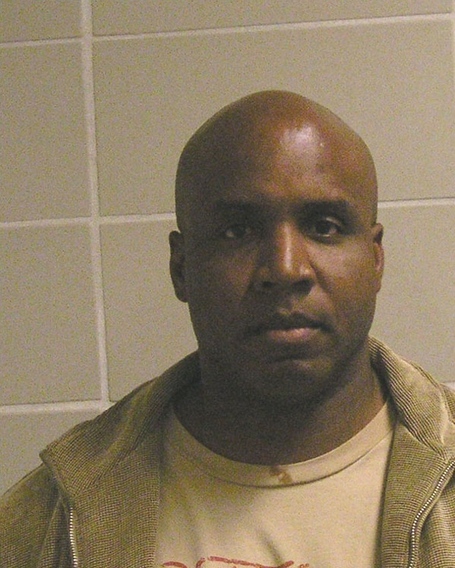 Bochy: His name is Barry Bonds. He’s a Los Angeles-area native who played for the Giants. He was the greatest player of his time, some say of the century. He was strongly suspected to have used steroids, and we buried him. This man has no identity, not in San Francisco, not in Pittsburgh. He does not exist, understand? I want one thing: How we can use steroids to our advantage.

Goodspeed: Well if you know him, why don’t you question him?

Bochy: No, he’ll remember me. I don’t want his anger clouding the issue. You go talk to him.

Bonds: But of course you are.

Bochy: Well at least he got his name right.

[Goodspeed and Bonds are ready to search for Colletti]

Bochy: All right, listen up. Mr. Bonds will run point for us. Dr. Goodspeed will be attached to his hip. You breathe, you breathe you. You piss, he helps.

Bochy: You’ll be accompanied by the strongest rotation in the NL. Matt Cain will be your ace, followed by Madison Bumgarner. Barry Zito and Tim Lincecum are your former Cy Young winners, and Ryan Vogelsong will handle all your World Baseball Classic needs. Your power will come from your corner infielders, Brandon Belt and Panda Sandoval. Hunter Pence could probably use some of these steroids, but – no! He’ll be fine. Angel Pagan, Andres Torres, Marco Scutaro, and Brandon Crawford will cover the defense. Now this is the same team that won the World Series last year, so there should be no problems winning it again!

Goodspeed: And you’re sure that not making any changes was a good idea?

Bonds: Welcome to The Rock!

[Tim Raines walks in, wearing his "Hall of Fame: Class of Next Year" shirt. He hands a larger shirt to Bonds and fist bumps him, then walks out.]

[Colletti takes out entire team. Bonds and Goodspeed strike out on their own.]

Bonds: You sure you’re ready for this?

Goodspeed: I’ll do my best.

Colletti: If Tim Lincecum were on my team, then I’d tell him: "I’ll take pleasure in cutting you, boy."

Goodspeed: "I’ll take pleasure in cutting you, boy." "I’ll take pleasure in cutting you… boy." What is wrong with these people, huh, Bonds? Don’t you think there’s a lot of, uh, a lot of anger floatin’ around this stadium? Kind of a pubescent volatility? Don’t you think? A lot of angst, a lot of "I’m conflicted about Mike Piazza" syndrome? I mean, grow up! We’re stuck in a stadium with a bunch of arrive-in-the-third-inning-leave-in-the-seventh Dodgers. SHAME ON THEM!
Which brings me to another question. When your back broke out—let me see if I can get this straight. You won four straight MVPs, averaged an OPS+ of 256 in those years, had an on-base percentage over .600 – that was pretty cool by the way-- and set the single season home run record. But how, in the name of Zeus’s BUTTHOLE, did your team get out of the cellar? I only ask because in our current situation, well, it could prove to be useful information, MAYBE!

[Goodspeed and Bonds find the stash of steroids. Bonds hands a syringe to Goodspeed.]

Goodspeed: You want me to inject this into my heart?!

Goodspeed: Get that thing away from me!

[Bonds shrugs and injects all the steroids himself.]

Bonds: Do you know the etymology of "flaxseed oil?"

Goodspeed: Yes. It means "flex" and "see deez oiled up muscles." Why?

Bonds: Well, if you fancy seeing someone flexing ‘roided up muscles, I recommend the home clubhouse at Dodger Stadium. Hitting coach’s locker.

Goodspeed: Why, what will I find there… OH MY GOD! 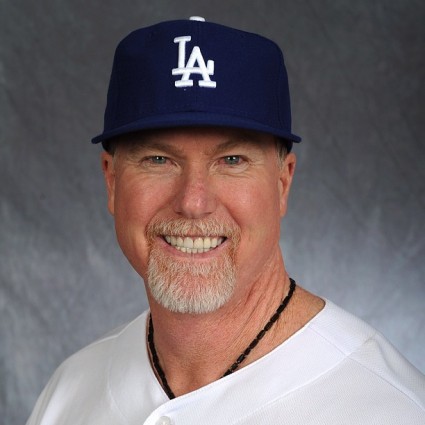 Sabean: Congratulations, Goodspeed. Well done. What do you think of the Dodgers’ chances of overtaking the Giants in the West now?

Sabean: Blown out to sea, huh?

[Goodspeed notices that Bonds has dropped something. He holds it up to the light to examine it.]