Ed Note. We've invited a range of celebrities to preview the other MLB teams this year. First up is famed author Cormac McCarthy, who is almost 80 years old and has no connections to Kansas City. Enjoy! 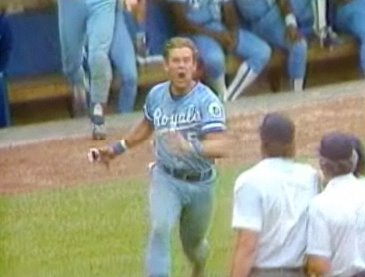 Dear friends my name is Cormac. I am a writer and teller of truths. I once stated: There's no such thing as life without bloodshed. I think the notion that the species can be improved in some way, that everyone could live in harmony, is a really dangerous idea. Those who are afflicted with this notion are the first ones to give up their souls, their freedom. Your desire that it be that way will enslave you and make your life vacuous.

For that reason I am a fan of the Big XII and the Kansas City Royals.

Sweat drips from the cap bill, splattering onto the hot flagstone below. The man reaches up and grasps his hat. He pulls it off and wipes the moisture from his brow with the back of his shirt. He sets the decrepit crown back on his head. He shifts his shoulders and his pack straightens and drops soundly back in place between his shoulder blades.

Another year, he says.

The parking lot is barren. He sighs and walks forward. The sign on the horizon taunts him. A mirage for the soul.

The climb to the top is long. The man persists. He reaches his aisle, looks at his ticket, moves on.

A fat man in crimson squats at the entrance. His enormity blocks the way. He turns to the traveler, smiles. Farts.

Their bodies perform a grotesque dance as the man passes in the narrow aisle. He allows for another sigh. He reaches his seat. He drops his pack. He has arrived at perdition.

When the trade was announced the man had tossed his transistor radio against the wall of his cabin. He blasphemed and went outside in the snow without shoes. He went into the shed and took out the mason jar he hid from his family. He opened it. Twigs and debris swirled within the oily liquid. He tilted his head back and drank.

That was months ago now. It is still freezing back in the middlewest but here the desert sun creates a terrestrial hell. The man continues to gaze. It could have been worse he says as he watches Shields walk around the dirt hillock. You better be worth all those good boys.

Shields moves quickly into the darkness of the dugout.

They’re comin for ya, the old man says. Ya know that right?

They ain’t goin to be nice about it neither. They say we sold the future. Theres some desperate people out there. They been desperate for a long time. The things they say, what we did to them boys. How we just ran em off. How we did it for you. Well, some folks is still furious with us.

I know skip. I aint scared neither. The fire burns in me. I’ll carry it and I’ll carry you.

Silence falls on the darkened hovel. Shields turns and walks.

You best get that posse together, the old man says. Guth and Ervin, I know I can trust em but your boy Wade, I ain’t too keen on. Same with Bruce. Them boys worry me.

Don’t you worry skip. We’ll show them sumbitches. We’ll give them a goddamn show.

The calamity of sound breaks his meditation. A white ball caroms off the seat in front of him and punches itself into the fat man’s side. A yulp is uttered from somewhere in the mass of flesh. The man looks away. Down below the man sees a blue dot standing with a club. He looks closer. The number four is emblazoned on the figures back. The man smiles.

We got Gordon and that’s all I goddamn know, Yost says into the phone. He and Cain and that idiot. That’s our outer defenses.

The old man continues to listen to the other end of the line. He picks up some of his papers and stacks them and puts them in a nice pile and continues to listen. The doorknob jiggles. A mongrel stands in the doorway. Yost looks at the idiot. He is tall and misshapen and his face is smeared with feces and he stands peering at the old man with dull hostility silently chewing a turd.

Shields places his mitt onto the wooden bench and bends to tie his cleat. The posse was good he thought. He’s seen better but he’s also seen worse. He’s still carrying the light. And they saw it.

The mechanical clank of club meeting stone rings out from across the green expanse. Shields adjusts his line of sight to the end of the dirt road. There a giant stands bent over swinging. He thrusts his arms out and toward the rotating rocks and his club banishes them from sight. His feet are light and nimble. He is dancing, dancing in the box. He dances in light and shadow and he is a great favorite.

He is Country Breakfast. He says that he will never die.

The fat man’s wheezing has become audible. The man stands and watches in a group as the injured is treated. A welt is seen every time the fat man’s shirt is lifted for inspection. It is as black as soot and pulsates. The man looks away.

He adjusts his hat and reaches into his pocket. He pulls out a flask and takes a long draw. He puts the flask away and looks out onto the pasture. Four men take turns fielding grounded balls and throwing the orbs amongst themselves.

A car backfires in the parking lot. Tires screech in the distance.

The old man slumps in his chair. The phone is still at his ear. He is reading from a list.

Lookit, its Hosmer at first, Getz at second and Moose at third. Escobar is going to be at short and Pérez is our backstop. There is a long wait before he talks again.

Yes I’m sure the kid can do it, he may have destroyed his damn body up last year but its healed now. There is another pause. He continues. It don’t matter who we traded now they ain’t here. So they ain’t no help. Write whatever the hell you damn want.

Yost hangs up the phone.

Shields releases the ball. It snaps from his fingers and breaks before diving into a leathered paw. Pérez lifts his mask. Nice throw, friendo.

The masked god in black moves behind Pérez and lets out a guttural noise that signals the beginning. A man in crimson walks forward and stands before Shields wielding his hammer. The ball is released.

The man watches as the ball leaves Shields hand. It spins and dips. The masked god does not make a sound. In the distance a light flickers on a large board. Above it is the word ball.