This, I'll warn you, is going to read like an it's an ode to Eric Davis, and that's totally on purpose.

As the legion of Red Reporter writers waited in the bread line outside of BK's 97th floor office for our assignments ("WRITE MOAR GOODER ABOUT BASEBALL!!") and rations (our weekly slab of bacon and a bottle of Thunderbird wine), I had secretly hoped that I'd be lucky enough to be the one asked to assemble the quintessential attributes of the select few Reds to have ever roamed CF.  I've always viewed CF as one of the 'best of the best' positions, one that requires traits and skills not possessed by players capable of manning the corners of the outfield, and if you were good enough to be a competent CF, you'd be a well above average LF or RF.

So, yeah, I've always had an affinity for CFs, even those who couldn't really hack it at the plate.  While I looked on as Drew Stubbs was gradually exposed as a Major League hitter, I still knew I was watching an elite athlete who possessed good enough speed to outrun even people paid to just be fast, a guy with coordination and eyesight good enough to track down a spinning sphere hit hundreds of feet at a hundred miles per hour.  And Drew Stubbs doesn't come close to cracking the threshold needed to be a component here.

Some singers can fake it on guitar, and some guitarists can sing a lick, but there's a very small group who have ever been excellent at both.  Fewer still have managed to master both arts and be healthy and relevant beyond their initial flash of fame.  Being an all-time elite CF demands a similar set of skills, and there's an ample collection of CF frankenparts in the Red Reporter Archives (ken's basement) to put together a player so great that even Dan Shaughnessy would vote him into the Hall of Fame.

Of the six players who have played the most games in CF of any in franchise history, there are 11 All Star Game appearances, 8 Gold Gloves, 16 seasons of receiving MVP votes, and 2 Silver Slugger awards.  There's one Hall of Famer, one will-be Hall of Famer, one should-be Hall of Famer, and neither, in my opinion, was the most talented CF to ever don the jersey.  They'll each feature prominently is this discussion...err...construction.

In his 12 years as a member of the Cincinnati Reds, Edd Roush managed to hit a cumulative .331.  He twice led the league in hitting (.341 in 1917 and .321 in 1919), and his 1919 average was actually the lowest single season average he ever had in any full season he played in Cincinnati.  He struck out just 8 times in 418 PA in 1921, and pretty much defines the idea of a 'contact hitter' regardless of which era saw him play.

While Roush clearly gets the nod here, Vada Pinson deserves at least an honorary mention.  He twice led the Major Leagues in hits (1961 and 1963), twice led all of baseball in doubles (1959 and 1960), and had more triples than anyone else in baseball in 1963 and 1967.  His 1881 hits as a member of the Reds is the most by any non Hall of Famer in team history (Pete Rose Honorary Asterisk Edition), and he hit a tidy .297 for his Reds' career.

In his first season in Cincinnati, Ken Griffey, Jr. hit 40 HR and slugged .556, which was good enough for a single season OPS+ of 133, the second highest full season in his Reds' career.  Impressive?  Sure, but given the era and the park in which he played, it doesn't begin to stack up with the late 80's seasons put forth by Eric Davis.  This, I'll concede, is certainly a product of Davis being a Red in his prime while Griffey's best seasons were behind him before the trade, but there's no way to discount the power possessed by the former number 44.

It's close, but I'm leaning Davis.

Oh, isn't comparing eras so much fun?  I mean, Bronson Arroyo has struck out more batters per 9 innings than Christy Mathewson and Cy Young, but is that because he's a better strikeout pitcher or because Heinie Groh had a better eye than Pedro Alvarez?

I bet Dan Szymborski is already working on creating K/BB+ to let us judge who had the best batting eye comparatively across generations.  Yeah, I'm sure of it.

Griffey walked a lot and didn't strike out very much for a power hitter during his era, and I always thought he had a pretty solid approach at the dish.  Davis, too, was a solid walker, but he struck out more often than Griffey in an era where that was less common.  Pinson seldom walked, and his strikeout numbers seem a bit higher than normal for his era, and Gus Bell seems like a slightly less free-swinging version of Pinson during nearly the same time frame.  Roush struck out not and walked rarely, but as was common for players in his age, walked more often than he struck out.

What is plate discipline, anyway?

Davis gets the nod.

Vada Pinson had 19 assists en route to winning a 1961 Gold Glove, and he managed to crack double digits in assists five times in his Reds career.  Edd Roush's 1919 saw him throw out 22 runners as a CF, tops among contenders here, but he also played in an era that saw a lot more runners thrown out on the basepaths, everyone dressed in black and white, and they actually played the game using an apple and an upside down broomstick.  It was probably also really hard to be really fast on the basepaths while wearing baggy wool jerseys that acted like parachutes when players reached top speed.

Pinson gets the nod because I said so.

Griffey's CF prowess during his Seattle days was legendary, and his streak of winning Gold Gloves for 10 consecutive years was duly warranted.  The Reds, as we all know, didn't get that Griffey, though, and we're all painfully aware that he probably should have spent the majority of his Reds' career in RF or LF instead.  Griffey's first year with the Reds was the only one that saw him post positive dWAR (1.3), and it was a steady decline from there.  Davis, albeit in his prime during the time, actually had a similar defensive decline over his Reds career as Griffey, and was never really noted as being a top-notch defender.

I have no eye test to back me up, of course, but the numbers certainly dictate that whomever thought playing Gus Bell as a CF was out of their mind.  He never had a single season with a positive defensive WAR.

The glove portion clearly goes to Cesar Geronimo, whose four consecutive Gold Gloves while with the Big Red Machine were clearly warranted.  Geronimo was good for 2.4 and 2.7 dWAR in 1974 and 1975, respectively, and that's clearly superior to anything provided by the other candidates.

Gus Bell topped 150 games played in each of his first four seasons as a Red, but was unable to replicate that durability later in his career with the team.  Cesar Geronimo was a pretty consisent participant with the Reds following his trade to them from Houston, but he was never asked to be a completely full-time player.

Davis's fragility derailed an amazing start to what could have been a Hall of Fame career, and Griffey's inability to stay healthy soured what seemed assured to be a congenial, record-breaking homecoming.  Roush, too, struggled to consistenly stay in the lineup on a day to day basis, thereby limiting his overall ability to make an impact.

Vada Pinson, however, was the pinnacle of durability, and he played at least 154 games for the Reds for 9 consecutive seasons, twice leading the league in Plate Appearances and At Bats and leading the majors in games played once.  So yeah, Vada wins durability.

I have no idea how to make intangibles tangible, but I'll try anyway because I really, really like bacon and Thunderbird wine.

Davis and Roush won a single World Series with the Reds, and while Davis hit a memorable homer in his, neither really distinguished themselves in their postseason careers.  Geronimo, of course, won the World Series twice with the Reds, and he played big roles in both 1975 (2 HR, .957 OPS) and 1976 (2 SB, .862 OPS).  Junior's Cincy career was like watching the baseball version of Marley & Me, and I generally get sad just thinking about it.  In fact, the only thing more sad than that is looking at Pinson and Bell's combined output in the only postseason series of their careers (the 1960 World Series, where they went a combined 2 for 25 with no walks).

In fact, including Bell in this group was probably a bad idea, and that's pretty sad, too.

There's only one guy here who was on a poster on my wall as a kid, though, and that's Eric Davis.  There's actually only one guy on this list who was on two posters on my wall as a kid, and that's Eric Davis, too.  Eric the Red was also a ridiculously cool nickname, although he had nothing really in common with Erik the Red and it's absurdly unoriginal.

You don't get a vote.  Davis wins. 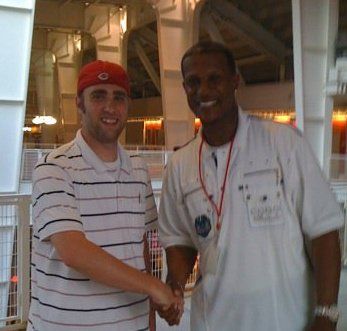