Share All sharing options for: Red It, Watched It, And Wept - Week of 12/22/13, Holiday Advice Edition

We Take Credit For All The Stupid

Last week Three weeks ago, we here at RIWIAW made an errant attempt at humor suggesting that this is the perfect time of year for bored fans to start Reds rumors on Twitter. Well, it turned out that some jackball took our advice and decided to flood the city with nonsensical drivel concerning the Winter Meetings. Heck, they even went so far to create a rumor about swapping Brandon Phillips for Matt Kemp, much to Kevin Mitchell is Batman’s chagrin. However, the one crucial element missing of this fake Twitter account was humor. BP for Kemp would have actually left (intelligent) Reds fans happy. Whereas, trading BP for, say, Dan Uggla while absorbing the entirely of both their contracts would have been a humorous denouement to what could have been a clever use of one's time. The next time (and as sure as there will always be an England, there will be a next time) you or your high school classmates decide to create a fake Twitter account, supplement it on the back end with some embargoed press releases or a corroborating shock jock on WLW. We know that all you're looking for is attention (which is why we here at RIWIAW will not post your name), but unless you leave us wanting for more, you're not going to get any in the future.

Nothing Left To Choo On.

Reds bloggers have spent the past twenty-four hours lamenting the loss of Shin Soo Choo and all the puns associated with his name. In so doing, we’re left wondering what the heck the Reds will do in order to fill the void left by the player who finished fourth in the league last year in OBP. Outside petitioning Major League Baseball to permit Joey Votto to bat immediately before and after himself, there may not be a whole lot of movement the Reds can do when it comes to improving their roster. Sure, we can speculate over which reclamation project may have the most gas remaining in their tank and endlessly kick the tires of players with a history of knee injuries, but we won’t fully know if we’re going to be disappointed until Spring Training. So, relax, Reds fans. Prepare for disappointment, but there’s no need to embrace it yet! There will be plenty of time in a few months when we fully recognize the chasms in the lineup of the Reds.

Tony With A Tiger

We’ve routinely criticized Tony La Russa here at RIWIAW for his history of petty complaints, inventive use of the alphabet, and overall treatment of other human beings. However, if there’s one thing he has on us is that he’s an animal lover. Like, to the point where it obviously envelops the love that would normally be shared between himself and humans. His advocacy for the rescue of furry friends is only matched by his staunch opposition to the brightness of scoreboards. In the spirit of the season, we wish TLR a Merry Christmas in hopes that his painting commemorating Cardinals World Series victories never becomes obsolete or outdated.

Deciding on hat for @BaseballHall HOF. How about this one? pic.twitter.com/6OEBXJUYOa

We here at RIWIAW have recognized that our page clicks aren't up to snuff compared to the other articles on this site. Granted, a large portion of that has to do with the fact that baseball blogs don't fare too well on Sunday. Ergo, here is our attempt to ensure that we get the page clicks we deserve today: I dreamed I was in a fantasy football league with C. Trent Rosecrans and Dan Szymborski, The winner of the league was scheduled to receive a Cracker Barrel gift card. This card cannot be used for Duck Dynasty merchandise and not redeemable until after the winter solstice. I forgot to update my lineup because I was on hold with my credit card company after Target's credit card breach. It turns out I paid for a Brian Boitano DVD with my Discover card there last month. I should have paid in bitcoin. Oh well, it could be worse. I could have created a listicle for Bleacher Report about the 40 things about sports babes not featured on Buzzfeed. Benghazi.

The big controversy in Major League Baseball on this fine Sunday centers around pitcher Grant Balfour and the Orioles’ decision to not sign him after a physical. You see, before spending millions of dollars on a pitcher, Baltimore was concerned with the remnants of Balfour’s shoulder and elbow surgeries dating back almost nine years. In some corners of the league, teams want to make sure a player is a relatively prudent investment before inking a $15 million deal. Balfour did not take this snubbing lightly and decided to lash out publicly against Baltimore Executive Vice President Dan Duquette. MLB Analyst Jim Duquette, cousin of Dan and lover of all things nepotisic, interviewed the subject-matter expert of signing already-injured players, Reds Medical Director Dr. Tim Kremchek. Reds fans with memories of Ryan Madson, Gary Majewski, Eric Milton, Paul Wilson, and Jimmy Haynes will not be shocked with his take on the situation: 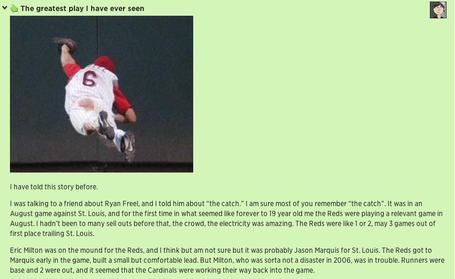