Let's not get too cute. Johnny Bench is pretty much the perfect catcher, no matter the uniform.

Share All sharing options for: Assembling the Perfect Reds Catcher

As we continue our series of Franken-Reds, today we take look at the catcher position. The Reds currently have two Hall-of-Fame catchers, one who will make it circa 2037, and three others on the RR Top 100. The Reds have had a Bubbles, a Heinie, a Farmer, an Ivey, a Smoky, and an Admiral. More recently, the likes of a Latin Love Machine, a Clutch Man, and the owner of the best damn mustache in baseball have worn the wishbone C behind the plate.

Which of these has the parts to make up the perfect Reds catcher? Read on to find out, mmmkay.

Owner of the "Most Cincinnati Name" of the 1920's, Bubbles Hargrave tops Reds' catchers in batting average, sporting a .314 average over 2,671 plate appearances. Bubbles failed to best a .300 average in only two of his eight seasons with Cincinnati - his first (.289) and last (.295) - and became the first ever catcher to win a batting title in 1926, when he hit .353. Ernie Lombardi was no slouch at the plate himself, coming in second on the leaderboard with a .311 average over 4,286 plate appearances as a Red. Schnozz became the second catcher ever to win a batting title in his MVP season in 1938, batting .342. No catcher would accomplish the feat until Joe Mauer took home the crown in 2006. This is pretty much a toss-up, but I'm going to give it to Ernie.

Here's where it gets kind of difficult, as there are a bunch of old-timers that have lower K% than BB%. Farmer Vaughn has the lowest K% of any Reds catcher, striking out only 2.9% of the time over 2,613 plate appearances from 1892-1899. Ed Bailey has the highest walk rate at 12.9%, but struck out at a 13.6% clip. So, I'm giving this one to our favorite philosopher, Ryan Hanigan, who has the 2nd highest BB% (12.0) while striking out only 10.1% of the time in a much more K-friendly era. And I kind of miss him already.

(If we were assembling the worst catcher in Reds history, Jason LaRue would take this category in a landslide with his 25.4 K% and 7.7 BB%.)

Picking the best baserunner out of a group of catchers is kind of like naming someone the valedictorian of summer school, but here we go anyway. Bench has the most stolen bases (68), but he's also the longest tenured catcher, so... yeah. Bench was an above average athlete, and not the lumbering galoot many catchers are, so I'll give him the benefit of the doubt. He had to have decent enough wheels if Sparky let him start two games in CF in 1970, right?

There's a reason Johnny Bench is considered one of, if not the, greatest catcher of all time. The winner of 10 consecutive Gold Gloves, Bench was one of the most feared catchers to ever don the tools of ignorance, leading the league in CS% 3 times ('69, '72, '73). His numbers in 1972 were mighty impressive - he threw out 31 baserunners, and picked off 8 more while allowing only 24 stolen bases. Opposing teams were just terrified to run on him. His overall CS% suffered due to his longevity, but his arm strength during his peak was said to rival most pitchers in the game at the time. According to FanGraphs' defensive runs above average, Bench saved 161 more runs than the average catcher over the course of his career.

This one goes to Bench as well. Johnny appeared in 1,742 games as a catcher which is good for 15th most in major league history. Aside from 1967, where he made his debut in late August, Bench played more than 110 games every season except for 1981, when he suffered a broken ankle.

I'm kind of sick of talking about Johnny Bench at this point, so Ryan Hanigan takes this one for his handling of the pitching staff, pitch framing, and general awesomeness. 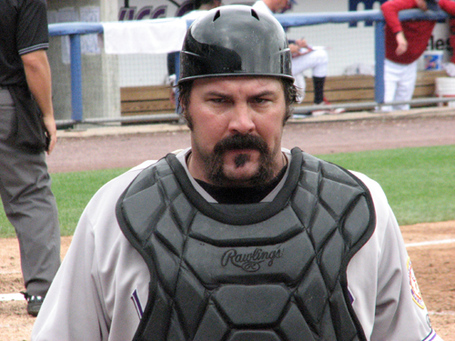 Four parts Bench, two parts each of Hanigan and Lombardi, and one part Corky. Mix those together, let them simmer in a crockpot, and baby, you got a stew going.