Have you ever wanted to learn more about the game's newer and more advanced statistics but didn't know where to start? Have you ever read an article that liberally mentions WAR or xFIP, leaving you feeling as if you walked into Math 401 when you haven't taken Math 101? It's ok, don't worry; that's how we all felt the first time we stumbled upon these figures. The good news is that the best of these statistics make a great deal of sense once they are explained. Often, though certainly not always, the calculation of these figures is straightforward upon closer inspection.

Here at Red Reporter, some of us are more interested in statistics than others, but we've all been known to use these newer metrics. Unfortunately, we don't always take the time to explain the figures. I know that I'm frequently guilty of inserting statistics without providing an adequate illustration of their meaning. In an effort to provide context to these figures and their use, we've decided to roll out a new series of posts exploring these new metrics. We will start with the simpler statistics and work our way to others from there. You won't need a statistics or mathematics degree to understand these posts, and best of all, we'll have fun. I promise.

On-base percentage, or OBP, measures the frequency with which a batter reaches base. OBP is expressed as a decimal rounded to three places, as in .300. Thus, OBP looks like batting average. However, instead of expressing the number of hits per at-bat, OBP represents the number of times on base per opportunity. The formula is simple, and one needs just five basic counting statistics to calculate OBP. These five stats are hits, walks, hit-by-pitch, at-bats, and sacrifice flies. The formula is:

Oddly, OBP does not count all of the ways in which a hitter can reach first base safely. Rather, the formula includes only hits, walks, and hit-by-pitch. Of course, these are the most common methods of reaching base, so it makes some sense to simplify the formula by excluding reached on error, fielder interference, etc.

Why should we use OBP? What advantage does it possess over batting average? The primary benefit of OBP is that it measures a player's performance with regards to avoiding outs. Baseball does not have a clock like so many other sports. Rather, baseball teams operate under the constraint of 27 outs. Once a team has used all 27 of its outs, then the game is over.

"Graham," you're probably thinking, "I know the rules of baseball. Why is this relevant?" Well, teams that are better at avoiding outs score more runs than teams that make outs frequently. This is intuitive when you think about it. For one, when a player doesn't make an out, he reaches base. At the simplest level, scoring runs is a function of reaching base and advancing runners. A player who reaches bases also hasn't used one of those precious 27 outs, thus giving batters behind him the opportunity to advance him and others around the bases. This is why sacrifice bunts do not make sense in several situations. It is rarely a good idea to attempt to use an out. We look at OBP in order to determine which hitters and teams reach base with regularity, and thus preserve a team's outs.

Like any stat, OBP is not without its flaws. For one, OBP does not tell us how a player reached base. A home run and a walk count the same when computing OBP. Obviously, a home run is far more valuable than a walk. In addition, OBP is context neutral, meaning that a single with the bases empty and no outs counts the same as a single with the bases loaded and two outs.

Generally speaking, we prefer statistics to be context neutral so we can better isolate the batter's ability rather than his teammates' production or the sequencing of events. There are situations that call for context dependent statistics and such figures do exist, but the topic is beyond the scope of this article.

Another disadvantage of OBP is that it ignores several ways of reaching base as mentioned above. For example, reaching base on error (ROE) is a skill, and OBP ignores this skill. Usually, the value of this skill is small even in the aggregate, though excluding ROE does cause a small loss of precision.

The last notable disadvantage of OBP is that it is not park or league adjusted. It is easier for players to post a higher OBP in parks such as Fenway Park or Coors Field than the Oakland Coliseum or Petco Park. Likewise, OBP has fluctuated throughout time. Carl Yastrzemski led the American League with an OBP of .395 in 1965. However, in 2001, Jason Giambi put up the highest mark at .477. There are ways to adjust numbers for park and league context, but we'll save that topic for a later date.

What is a Good On-Base Percentage?

We all know that a .260 batting average is about average while a mark of .200 is quite poor. We know that .300 is a good figure and that .340 will often win the batting title. However, the values of an average, good, or bad OBP are not so ingrained in us. In 2013, the major league OBP was .318. Among players who qualified for the batting title, Detroit's Miguel Cabrera had the highest OBP with a mark of .442. Kansas City's Alcides Escobar posted the lowest figure at .259. Below, I have included a table that shows OBP for various percentiles in 2013. For example, Matt Holliday's OBP of .389 was better than that of 90% of qualified batters in 2013. 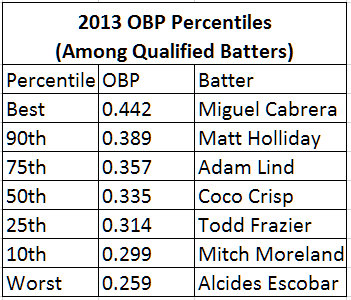 How does everyone feel about OBP now? Was all of this obvious to you, or do you feel as if you learned something?