We’re back for the off-season! After a disappointing season that resulted in a third place finish and losing to a team anchored by Russell Martin, RIWIAW has returned to report on what will be an even more disappointing offseason. Instead of submitting a story every day of the week, we’ll be introducing flashpoints (read: hyphens) in lieu of days because, well, most days do not have anything of note for us to complain about. That being said, onward with the kvetching!

- Beding Down The Haus

Now that the baseball season is over and Dusty Baker is gone, Paul Daugherty cannot find anything else better to do than to troll individuals who find themselves beholden to logic. This culminated in P-Doc writing a revisionist history of Bob Bedinghaus. In case you forgot, Bob Bedinghaus is the former Hamilton County Commissioner who was responsible for the exceptionally one-sided stadium lease deal for the Cincinnati Bengals. How one sided? Well, even though Hamilton County has reduced the size of its government by 1/3 over the past decade, they’re still going to be responsible for buying a new scoreboard for Paul Brown Stadium at a cool $10 million. In his piece, P-Doc engages in the fear-tactics usually peddled by radicals by asserting that if it were not for the stadium deal, Cincinnati would be Detroit. After all, the Tigers, Lions, and Red Wings do not play within the Motor City Limits. We’re sure it is pure coincidence that after being disgraced at the polls in 2000, Bedinghaus was hired by the exact same team that received the one-sided lease. We’re also sure this tall tale of redemption by Paul Daugherty was not a prerequisite to gain access for his exceptionally unwatchable webcast with Bengals players every week.

In the afterglow of all the lit Mups from the 2013 Playoffs, there was much joy in Boston following their victory in Game 6 over the St. Louis Cardinals. Perhaps even more surprising than John Lackey's 2013 performance (or his record of leaving women stricken with cancer) is Peter Gammons’ Twitter feed. For one, all of Gammons tweets were unquestionably in the English language. Leave it to the Original Red Sox Fanboy to save his clearest and most articulate tweets for instances of completely journalistic hero-worship:

And, for an even less enjoyable cavalcade of Beantown gloating, be sure to check out Bill Simmons! I haven’t read Grantland this week, but I’m sure there are about 50 articles about how this World Series is the most important ever and how all the bearded players are going to be whisked into immortality alongside Paul Revere, Joey McIntyre, and the referees who created the Tuck Rule. .

- TAKE ME TO YOUR LEADERSHIP

If you thought "overvaluing Joey Votto," "undervaluing Brandon Phillips" and "#FIREEVERYBODY" were annoying memes during the regular season, I betcha can't wait until the silly season that occurs after the World Series and before Opening Day. Mark Sheldon provided an insight into what will be the hot topic this offseason. No, not re-signing Shin Soo Choo or Bronson Arroyo; because neither of those things will happen. The important topic this year will be leadership and the current lack of it by our Redlegs! Because, without a leader, twenty and thirty-something multi-millionaires won't take their profession seriously enough. This non-troversy gives us the opportunity to not only speculate on whose minus-bat will clog the lineup due to their veterany-presence, but also gives us a chance to browbeat our favorite players. Joey Votto is too introverted! Brandon Phillips is too much of a ham! Jay Bruce is Jay Bruce and Marty said so! See how much fun this is? The studio at 700 WLW is going to need a dehumidifier.

- Every Rose Has Its Tell

If someone would conduct a study on former professional athletes and their inability to pick up on standard social cues, then Pete Rose may be the perfect Patient Zero. In spite of his canceled television show, his unwatchable commercials hocking bedroom sets designed by avowed racists, and his general inability to connect with most people, Rose continues to satiate his impulse of jumping in front of the nearest camera. This week, it meant going on Keith Olbermann's new Fox Sports MSNBC Current TV Al Jazeera English Home Shopping Network ESPN Show in front of, of course, a backdrop of Las Vegas. We here at RIWIAW understand that Rose lives in Vegas for 10 months a year while selling autographs to kids for $65.00, but here's a tip from out PR Department: if you want people to stop associating you with gambling, you may want to give the appearance that you're disassociating yourself from it.

Comment(s)  of the Week: 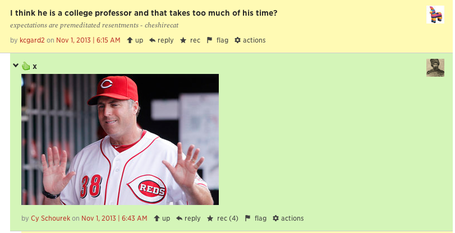 Have you ever wanted to sport orange and black for a Cincinnati team without being the source of ridicule amongst your NFL friends? Well, now's your chance. The Cincinnati Reds Team Shop has introduced a Halloween themed uniform color scheme for people who either do not want to be associated with the Bloods or who want their friends to constantly readjust the colors on their computer screen. Unfortunately, these jerseys and shirts are not yet customizable so you'll have to hold off on getting one that reads Shin Soo Boo, Ismael Gouhl-lon, or Devil Mesoraco. We here at RIWIAW think this is a huge marketing opportunity for the Reds. Orange hats for Halloween. Pilgrim hats for Thanksgiving. Blue hats for Hanukkah. Blue pilgrim hats when Hanukkah overlaps Thanksgiving. Purple hats for Lent. The permutations are endless! Somewhere, John Fay is slowly weeping.