You're so Pretty When You're Unfaithful to Me

Dealing with disappointment, and happier thoughts.

Share All sharing options for: You're so Pretty When You're Unfaithful to Me

Jonny Gomes and David Ross had 482 plate appearances between 'em this year. I suppose you could add in Ryan Dempster, whose 171.1 innings (and 3 in the playoffs) is 30 innings less (and yet 3 in the playoffs more) than what he tallied in his time in Cincinnati pinstripes n' drop shadows. These are our heroes of the 2013 season.

I'm getting at the age where I'm getting used to disappointment. I remember playing football with friends pretending to be the entire golddanged Notre Dame backfield between us. Now I consider an RT or a green'd comment to give me a good-enough day to rest on my laurels. I suppose that I could say that this is all about "redefining success" and "creating manageable life goals", or Ty Willingham's decision not to recruit a bunch of slow dudes from 5'7-5'11 and 150-200 lbs, but I am still not over it. I still expect things to go my way and are puzzled when they don't.

Maybe this is my own fault as a fan. Maybe you all are much brighter-eyed and bushy-tailed about this. But for me, after the long slog of a season I can offer only a sigh. Maybe I'm morose or maybe I just have a very poorly-lit historical memory museum. I would probably need an hour or so to name the past decade's World Series winners. If you ask me any statistical trivia from 2000-2010 I'd mumble an answer that could be either "Pujols" or "Pedro," depending on how charitable my listener is.

So this seasoned ended with some bargained-for happiness. Two of the more beloved Reds-dudes got a ring. Our beloved tfm put my feelings quite well into her most-recent creation. I'm not gonna full-out spite the Cardinals, but I will bend the iron pride of the Red Sox as far to my will as possible, shifting the "s" and the "space" as necessary. I'll also chuckle when a Sikh Bostonian puts all of those dudes in dastars, giving us my second-favorite Gomes headwear pic: 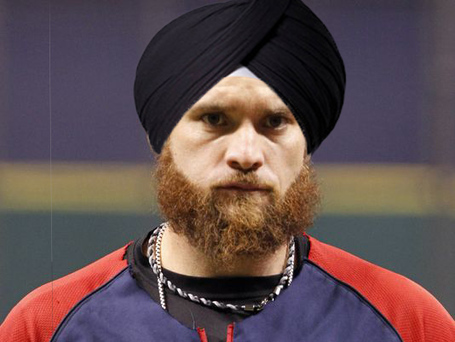 That said, I did not dream in April of the Boston Red Sikhs. But I guess I'll sit here on the cusp of November saluting the few men I used to share time with for no longer having to slum it with me. I never thought I'd have to defend Joey Votto, argue optimistically about Logan Ondrusek's K/BB, or copy-paste everything I said last time about trading Homer, Aroldis Chapman and the centerfield spot. It's time for another few months of planning what to finally say to that girl before she gets into the Cardinals' Trans Am. And, statistically speaking, it's time for another year of planning to feel like this.

None of which is at all negative. There's few things more enjoyable than shared melancholy. We all probably have retrospectively-warm memories of failing to get the girl, and all of these shared moments make the individual sweetness of having it finally work out all that much sweeter (that is to say, what: you think I left the US for my health or some shit?). I genuinely believe Red Reporter is the best site on the internet and have fought hard and will continue to fight hard to keep it that way. If you have any ideas on ways to help us in this, please, let us know on the comments. We have way more fun than we ought to over here and I really hope to continue our side being the fun-haver-ing-est place in SB Nation if not the world.

Welcome to baseball winter. We will have lots of fun stuff to talk about and celebrate and giggle and make eye-contact knowingly from twenty feet away about in the next few months/years/decades. But there's plenty of time to sigh into the whisky until then. See you all on the Other Side.