Since the Reds started winning again in 2010, the payroll and attendance have grown every year (using 2009 as the baseline). There have been two major leaps forward during that time:

There hasn't been a 1:1 correspondence between attendance numbers and payroll. After attendance made its big jump during the 2010 season, payroll went up by just 2.6% the next season. But in the aggregate, the two have grown at a similar rate since 2009: 10% average yearly payroll growth, 9% average increase in season attendance.

Of course, there are plenty of other sausage parts that go into the intestinal casing of payroll: current and expected TV deals, revenue-sharing from the league, off-season free agent markets, the balance sheet of the organization and willingness to spend by ownership. And a team can be improved without a big spending binge.

Every offseason - at least in recent years - it's been hard to predict how ownership will approach payroll as it builds the opening day roster. But the general trend has been upward.

Attendance in 2013 kept the pace of the last two seasons, growing by 6.2% over 2012 and setting a GABP record. That's about how much attendance grew in 2012 and ownership increased payroll by 23%. We probably can't expect another cash explosion like that, but I'd expect payroll to grow by at least 6% (the average growth using 2009 as a baseline) - and probably more like 10% (the average growth using 2010 as the baseline).

Since 10% is a nice round number - and higher than 6% - I'll be using that to look at the payroll for 2014. Last season, the total major league salary and pro-rated bonuses paid by the Reds was $100.7M. This is lower than the number Cot's and Baseball Reference uses, mostly because they ignore the fact that money was deferred in Bronson Arroyo's contract. The discrepancy doesn't matter that much because I'm using my own numbers from previous years to stay internally consistent.

Bumping that up by 10% gives the Reds over $110M to work with. Of course, a lot of that money is already present and accounted for.

Here's how I think that looks right now, with estimated salaries filled in for players without contracts and a list of bubble players shoved together in "Other." 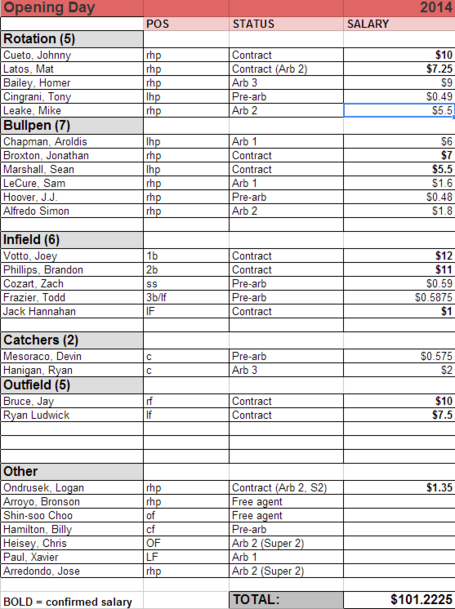 Some of my estimates could be off, but I think it's reasonable to say that the Reds have about $10M to spend to fill five spots: CF, one bullpen spot and 3 bench spots.

Obviously, there are a ton of moving parts at the beginning of the offseason. Joey Votto isn't going anywhere, but almost everyone else has a least a non-zero chance of being traded.

Homer Bailey might be the biggest variable. if he signed an extension, his 2014 salary would probably drop by at least a couple million. But if they can't work something out, he might be on the block. Meanwhile, Logan and Billy are in-house options that would add only $500K to the above payroll and fill two spots.

The Reds are in a similar spot to where they were last season - enough payroll flexibility to swing a major trade or sign an impact player. And plenty rope with which to hang themselves.