Reds Managerial Search: Why Jim Riggleman Wouldn't Be a Good Fit for the Reds

Or would. You decide Walt decides.

Share All sharing options for: Reds Managerial Search: Why Jim Riggleman Wouldn't Be a Good Fit for the Reds

This is the moment we have all feared since Jim Riggleman was hired to manage the Pensacola Blue Wahoos back in 2012. The sense of dread continued to grow last offseason, when Riggleman was promoted to Louisville and David Bell skipped town. And now here we are - Dusty is gone, and the Riggler is one of the top two early candidates to manage our favorite team.

In his 12 seasons as a manager (well, 11.5 technically) Riggleman has put up a .445 winning percentage (662-824). He has made the playoffs once as a manager, seeing the Cubs get swept in the 1998 NLDS. More often than not, Riggleman has taken over bad teams and brought them a little closer to respectability. If hired by the Reds, he would be asked to take a good team that has struggled to fulfill their goal of a championship and lead them to the promised land. Here's why I think that's a terrible, horrible, no good, very bad idea.

When Dusty Baker left Chicago, the tired story of "Dusty ruins pitchers" was a common refrain. But before Dusty took the job in Chicago, Jim Riggleman was at the helm, entrusted with the talented young arm of Kerry Wood. In 1998, the Cubs found themselves in a playoff race, and Riggleman leaned heavily on the 21 year old Wood. He threw 166.2 innings in 26 starts as a rookie in 1998, and 21 of those starts saw Wood cross the 100-pitch threshold. In eight of those 21, he surpassed 120 pitches, including a 129 and 133 pitch effort. Kerry Wood missed the entire 1999 season, needing Tommy John surgery in spring training, and the Cubs lost 95 games.

In 1997, highly touted right-hander Geremi Gonzalez was rode hard by Riggleman, tossing a combined 206 innings between the majors and the minors. He threw a grand total of 97 innings the year before. Yeah, yeah, the Verducci Effect is bullshit and all, but a 109 inning jump in usage is pretty insane. Not all that surprisingly, Gonzalez got hurt in '98 and was never the same pitcher. He ended up missing more than 3 full seasons due to injury. Gonzalez died at the age of 33 after being struck by lightning, but I don't think we can blame Riggleman for that.

In 2009, Riggleman became the interim manager of the Washington Nationals after the dismissal of Manny Acta at the all-star break. During the second half, young righty Craig Stammen pitched through an injury for months before speaking up and telling the organization he was hurt. It was revealed that he had a bone spur in his elbow, and needed surgery. When asked by a Washington Post beat writer what he thought of a top prospect pitching with an undisclosed injury for months, Riggleman had this to say: "[He] exhibited a toughness that you like to see in pitchers. You know, the attitude - if something's wrong here, I'm still going to pitch."

This attitude should be a major red flag for a pitching first team such as the Reds. Gritting it out and being a tough guy can take a small injury and turn it into a major one by overcompensation. We already have an organization that is not the best at diagnosing and treating injuries, let's not exacerbate the issue with a field manager that encourages players to keep quiet and play through pain.

In my opinion, this is a negative for any manager hired not named Bryan Price. Price has been a managerial candidate before, and it's something he clearly wants to do. With openings in Washington, Chicago, Seattle, and possibly more coming, I can't imagine that Price would stay with the Reds as a pitching coach if someone else is brought in to manage the team. Again, this team's best asset right now is pitching, and by all accounts, the pitchers love playing for Price. He's done wonders with Bailey, Latos and Cueto, as well as fixing castoffs like Alfredo Simon and Manny Parra. We got our very own pitching witch, let's not lose him.

In addition to a possible pitching regression, there could be a cascade effect from losing Price. Mat Latos and Homer Bailey have been on record praising Price, and with both of them needing to be re-upped by the Reds in the next few years, it might be for the best to keep them happy by keeping Price around.

This isn't such a huge deal for me as it seems to be for others. I mean, it certainly was bad to quit on his team in the middle of the season, when they had just pulled off an impressive, but not all that improbable, streak winning 10 of 11 games. I'm more concerned with his old school mentality and push-button managerial tendencies. And surely he's not dumb enough to do it again, right? Riggleman's ultimatum did show stubbornness, selfishness, and arrogance, none of which are traits you look for in a leader. 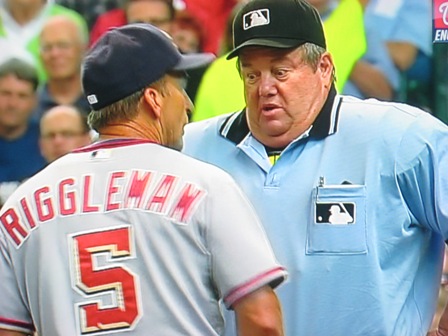 The best argument for Jim Riggleman is one word, typically abhorred by job seekers in all industries - experience. Yes, that experience resulted in a .445 winning percentage in nearly 1,500 games. And yes, he quit on the Washington Nationals in the middle of 2011. But managers improve in their second and third and hopefully fourth time around, after working through their prior mistakes. At least, that's the conventional wisdom.

As much delight as I get from poking holes in conventional wisdom, I think there's something to the value of experience for managers. Before Bobby Cox became a legendary Braves manager, he was a crappy Braves manager. The Braves played .451 ball in his initial 1978-1981 term. Upon returning in 1990, Cox led the Braves to a .576 WP and numerous playoff appearances for the next 21 years. Joe Torre muddled through pedestrian stints with the Mets, Braves, and Cardinals (.470 ball in 15 seasons) before overseeing the fin de siècle Yankees dynasty. To go back a bit further, the contrast between Casey Stengel's pre-Yankee record and his subsequent success is even starker.

Rather than dig up more examples, take a look at a broad, objective analysis of performance accounting for managerial experience. This study at Bill James' site doesn't go back as far as I'd like, but it's a good read and I recommend clicking through. The upshot is that managers with prior stints with multiple teams have a higher success rate than rookie managers.

Also interesting was the study's findings on managerial age. The best managers are usually young enough to relate to the players (i.e., under 45) or have accumulated enough wisdom and experience to earn the grandfatherly respect of their team (60+). Riggleman turns 61 next month; Price is 51.

The study's results all depend on how you define success, of course, and there's no accounting for the talent levels under each manager. So take it for what it's worth. But it's worth noting that Riggleman improved greatly upon his first gig (.385 WP for the ‘93-'94 Padres). With the late ‘90s Cubs, Riggleman led the team to two winning seasons, including the Wild Card in ‘98. He later took over a bad Nationals team in the middle of 2009 and brought them back to respectibility. Washington stood at 38-37 when Riggleman quit towards the end of June 2011. They were 42-44 for the rest of the season.

Riggleman's strength as a manager is the development of hitters. In Washington, he oversaw the breakout of Mike Morse, the breaking in of Ian Desmond and Wilson Ramos, Ryan Zimmerman's best year, and Adam Dunn's last good one. He had an older roster in Chicago, but nevertheless enjoyed steady 30-something production from Mark Grace and Henry Rodriguez. As well as the, ahem, "breakout" of Sammy Sosa.

When it comes to pitching, Riggleman rarely had much to work with. Outside of Kerry Wood's brilliant rookie year, Riggleman cobbled together rotations with mediocre horses like Steve Trachsel, Kevin Tapani, and Livan Hernandez (and those were the good ones). Riggleman nevertheless assembled just below average pitching staffs (usually around a 98 ERA+) thanks to stalwart bullpens in his Chicago and Washington years. The Reds' projected 2014 staff blows away anything Riggleman has previously worked with.

If 80% of life is showing up, Riggleman has an argument based on experience. Of course, he failed to show up just as the Nationals became relevant. Quitting on his team sticks in my craw, I freely admit. But I also don't want to be too quick to judge. The team's failure to extend his contract was cited as the main reason, but there's certainly plenty we don't know, such as whether the team's front office undermined Riggleman's authority in other ways. Tellingly, the Reds and other organizations offered him jobs not long after his resignation, suggesting that plenty of baseball folks are willing to forgive or justify Riggleman's decision.

What Jim Riggleman is, more than anything, is a baseball lifer. He was a career minor leaguer who climbed the ladder to get his first shot at managing at 40. After his dramatic Washington exit, Riggleman was happy to go back to the minors to help develop prospects - including Billy Hamilton, who enjoyed part of his best professional season under Riggleman's tutelage.

Does he deserve another shot at managing? Doesn't matter. Does his managerial background make him an attractive candidate? You decide!