Fear & Clothing in Cooperstown: Dead season at the Hall of Fame

Visiting the Hall at its darkest hour.

Share All sharing options for: Fear & Clothing in Cooperstown: Dead season at the Hall of Fame

It's a weird time to be the National Baseball Hall of Fame. Not only are the clouds of the Misguided Voting Era hanging directly overhead, but it's also the dead of winter. Kids are in school, the back roads of central New York are treacherous and baseball is not in the front of mind. There are plenty of places on earth that benefit from a pilgrimage imperative. At least in January 2013, Cooperstown tests its faithful just as much as Santiago de Compostela.

So it's a weird time to visit the Hall of Fame, but I did it anyway. I wouldn't say I'm a hero, but I would say there was a lot of fog on some of the roads that lead in and out of Cooperstown.

Controversial baseball writers' votes may be good business for bloggers, but it's a bust for this little hamlet when they don't induct anyone. Even though the Veterans' Committee successfully enshrined three new members, the number of surviving Detroit Wolverines fans who would see Deacon White inducted posthumously is probably very nearly zero. That, and the credibility blow the Hall has sustained might dampen attendance numbers for a while.

As the title shot above suggests, it's still Christmas there and wasn't entirely clear that the museum was even open. I had compulsively re-checked the hours several time, but not until I got through the second set of doors in the main entrance was I sure the place was alive - and not a public library. Then were the rewards of my terrible timing made clear - "hey, private museum."

It's a charmingly understated building in a beautiful postcard of a town. And it's a Hall of Fame and museum. If you go through it roughly according to the guide, the plaque room is something of an afterthought. The canon is the reason we talk about this place, but it's not as though I needed the knowledge of Craig Biggio's arrival in 6 months to enjoy it.

I'm sure many of you have been there and don't need a rehash. But I thought I'd share a few photos and reactions relevant to the Reds and unique to visiting at such a weird time.

Maybe the Hall just needs to ride out the current mess. Maybe it should "teach the controversy" and embrace the fact that some baseball-loving Banksy might secretly fix a Barry Bonds plaque to the wall. I'm not adding much of anything new to this conversation, but at the very least I would strongly recommend visiting things at off-peak times. I'll be attending the 2012 London Olympics this summer. 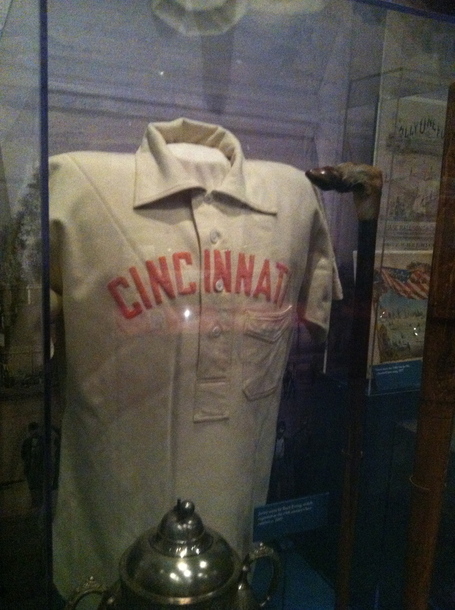 To the best of my knowledge, that is not an urn of Buck Ewing's ashes in front of his jersey. This is one of the items in the exhibit on baseball's pre-history (1800s). Ewing is a Hall of Famer, widely agreed to be the best catcher of the 19th century and the second-best Ewing in sports history. He played his last three seasons with the Reds (1895-'97). And this is a really versatile piece of clothing: with a collar and enough buttons to look like a dress shirt underneath a blazer. You could dress it up, dress it down or wear to an OTR bar. After reading this, I don't think it's unreasonable to assume Ewing did. 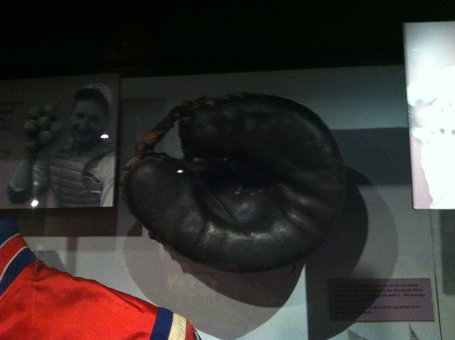 There isn't a ton going on for the Reds in these exhibits between 1900 and 1970. The seminal scandals in baseball history, including the Black Sox, are glossed. Either there isn't an artifact from Johnny Vander Meer or I missed it. In any case, that's why there's a Reds Hall of Fame and Museum. Above is Ernie Lombardi's glove, next to a picture of him doing that Reverse Hidden Ball trick that I associate with Johnny Bench.

Cincinnati has a rich history at catcher, beyond the obvious. Before Ewing, HOFer and part-time catcher King Kelly made his debut with the pre-outlaw NL Reds. The aforementioned Deacon White also played some catcher on that team. Lombardi was quite possibly the best-hitting catcher of his era, spending his prime years with the Reds. Then of course there's Bench. And the current crop: at one point, Tucker Banhart was the fifth-best catcher in the organization. 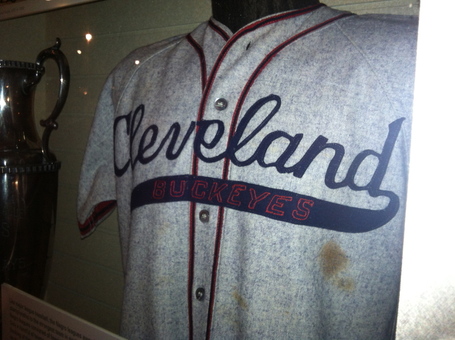 Out of context, this is a damn good-looking jersey for what would be the ultimate Ohio sports team (if you just added "of Cincinnati" at the end).

It's from the Negro Leagues exhibit. One of 11 Nego league teams in Cleveland history, the Buckeyes won the '45 Series over the Homestead Grays. I wish there had been a lot more on the Negro Leagues, though I guess I'm also beginning to imagine an 11-story museum. I hope to get to the Negro Leagues museum in KC some day. Buck O'Neill has a prominent exhibit in the lobby at Cooperstown. 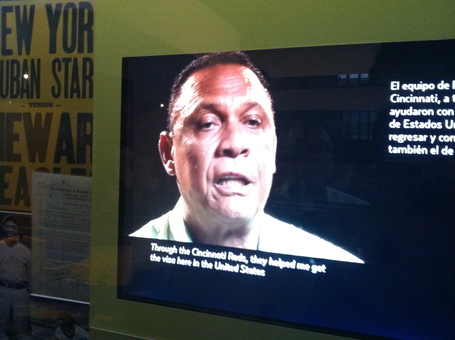 Tony Perez (and Edgar Renteria) appear on video in the Latin American baseball exhibit. I enjoyed hearing Atanasio's Cuban-inflected Spanish. But it was wrenching to hear about how he wasn't able to see his family for 10 years after coming the US to play ball. I thought of Aroldis Chapman and things that $30M contracts cannot heal. Or even make worse. 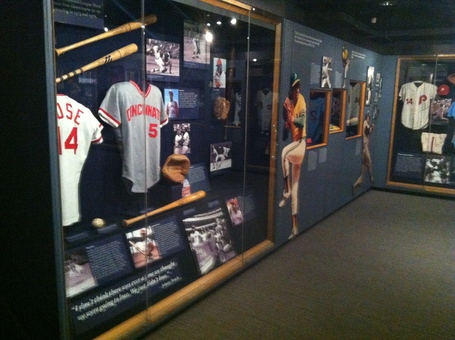 This is what you see when you round the corner into the 1970s - and probably just as blurry as if you had actually just left the 60s. The Big Red Machine gets its due, though I left wishing the exhibit had at least been slightly larger than the one on the late-1960s Orioles. Maybe they were too much of an ensemble. And maybe we also held on to a lot of that loot back home. 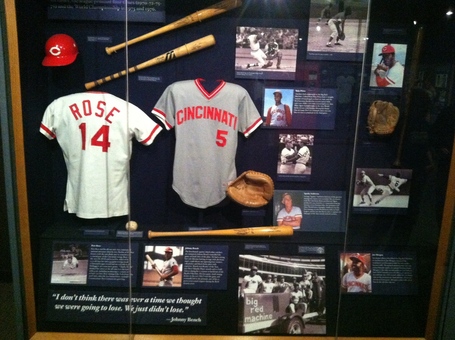 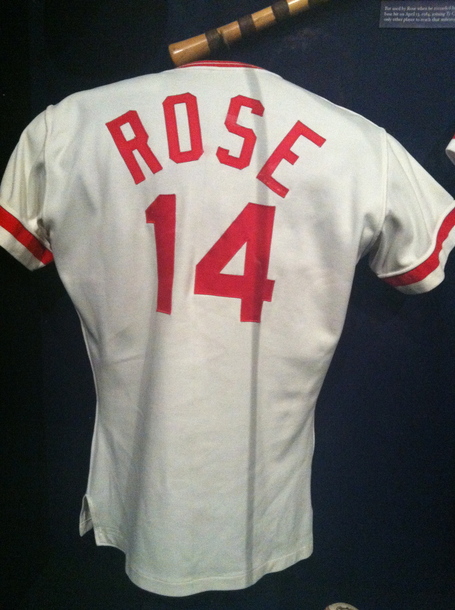 If you're one who believes Pete should be in the Hall of Fame - even after his reality show airs - this is what you are left to treat as his plaque. 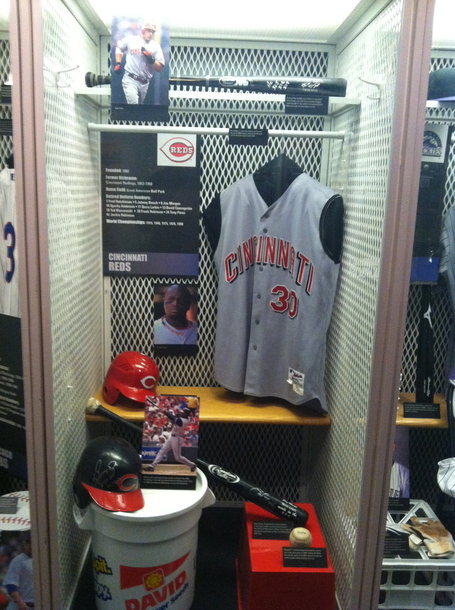 There's an exhibit encompassing recent history up to 2012, with lockers for each team housing artifacts from this century. Votto and BP photos are just sorta hanging out in there, but the game-used stuff belongs to Griffey and Casey. The dream houses I designed on loose-leaf paper growing up had rooms like this. 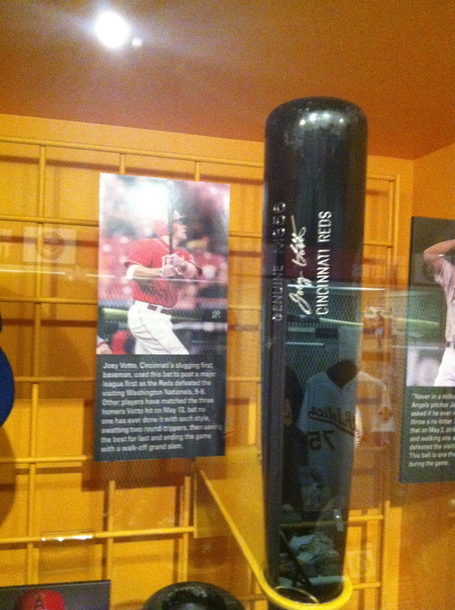 Also in that room is the bat Joey used on Mother's Day last season to club three homers. He was the first in history to cap a three homer day with a walk-off grand slam. He also stacked up 1.027 WPA, more than double his next-best mark from 2012.

About the most advance stat the Hall acknowledges is WHIP. 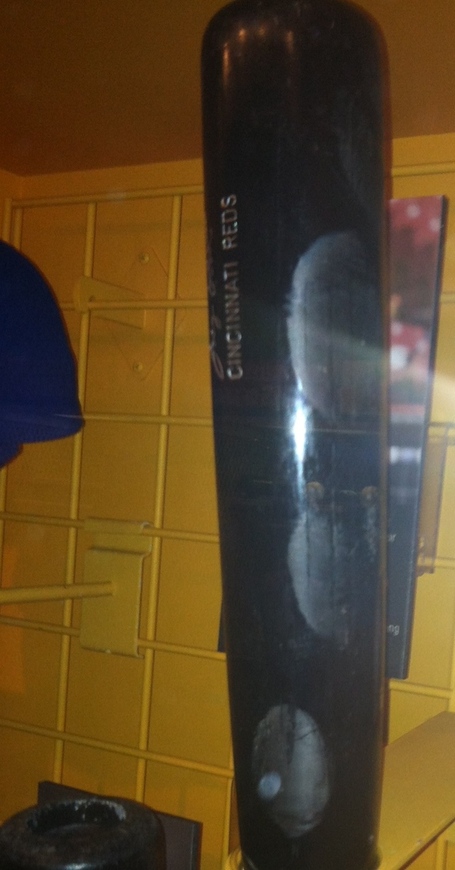 You can (kind of) see the three ball marks there. That, or they're Joey's fingerprints. 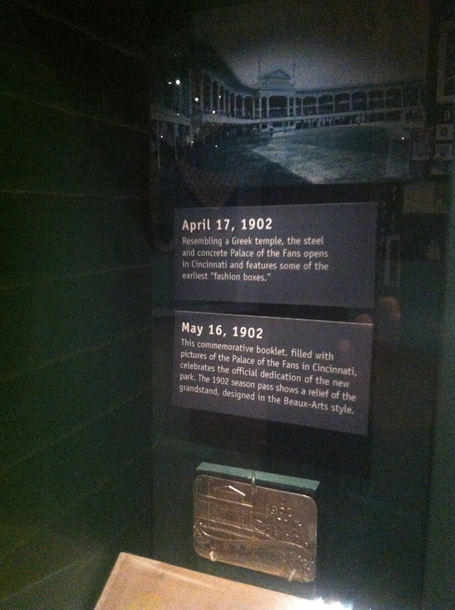 The Palace of the Fans was the immediate precursor to Redland/Crosley field. Replacing League Park, which burned to the ground, it existed for 10 seasons (1902-1911), before falling apart and then burning down. That's roughly 9 more mostly fire-free seasons than average lifespan of wood-frame stadiums of the time.

There are several nice-looking silver/gold plated season and lifetime passes on display. 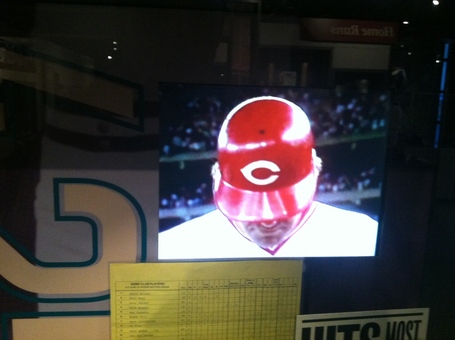 This was an accidental metaphor - a still frame from the video of Pete Rose breaking the all-time hits record. Also pictured is the score sheet from that day. 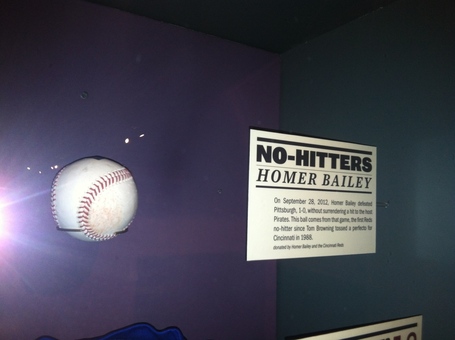 This was another happy composition accident - and the one example where the glare worked in my favor. Homer still holds the all-time record for Most Recent No Hitter. 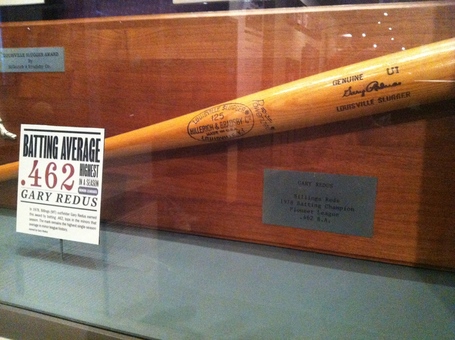 Also in the records exhibit, alongside Pete, Homer and a few other Reds, is Gary Redus, who apparently holds the record for highest batting average in a professional season (in the modern era). There are plenty of qualifiers, including the fact that he was 21 in rookie ball and it was only 68 games. But it's still an very impressive feat over 325 PAs, in your first season of pro ball. No only does his name have the word "red" in it, it's also a command. Fans should consider demanding to be "redded" more often. 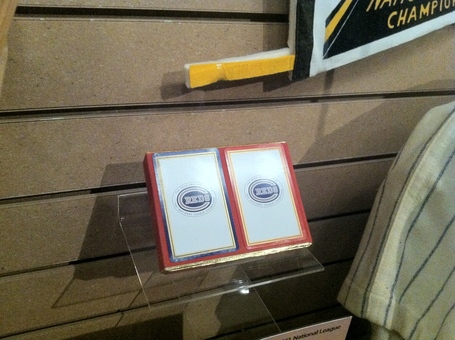 Here's a nod to the 1940 Reds in the World Series exhibit. A sign of the times, they were presumably awarded two decks of monogrammed cards for their victory and happy to get them.

Ken already included far more timely coverage of Larkin's footprint at Cooperstown. Ken also has cute kids, where I have accidental lens flare. But here's a picture of the Larkin shrine that sits in the anteroom before you reach the gallery: 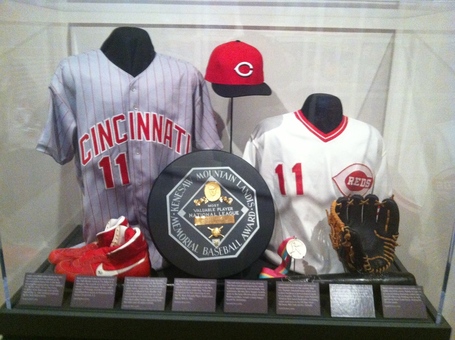 I was disappointed there weren't Larkin throwbacks on sale at the gift shop. They had a pretty nice Blyleven Twins jersey. I think they sold out a while a go and didn't expect a rush on them in January. I probably could have gotten something out on Main Street, where ever other store peddles memorabilia, though half of them were closed.

But I hadn't come to buy anything.