Share All sharing options for: Game played in alternative universe where Houston wins, Chapman blows save

I was going to give this to Matt Dominguez for going where almost no man has gone this year, but his defense looked so shoddy that I can't do it. Chris Heisey stroked three hits, including a triple, en route to scoring twice. Now that's a table-setter. He also made a Stubbsian catch in the 5th to take away a hit from Dominguez. As for honorable mentions, Homer Bailey recovered from a rough first inning to go 6 2/3 while allowing just the two runs. Joey Votto collected three of the Reds' four walks.

I wasn't in the thread for a while, but I saw that the estimable -ManBearPig has a good blackmail angle. Deviancy earns the win on a night were down is up and black is white. 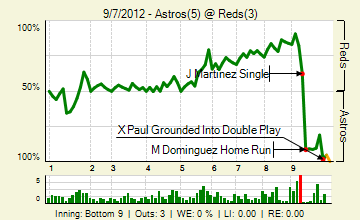