Getting Votto in the Lineup Counts as a Win, So, Reds Win!

Share All sharing options for: Getting Votto in the Lineup Counts as a Win, So, Reds Win!

Joey Votto returned to the lineup today after his 48 game absence, and went 2 for 3 with two singles and a walk, and that's great to have back. More importantly, however, his return allowed Dusty to move his lineup around to accommodate Votto, putting Brandon Phillips back at leadoff to give the Reds (in the future, at least) a more potent top of the order. That gets some bonus points.

Today's JNMHSotG, however, is undoubtedly Jay Bruce. Hall of Famer Hal mentioned it in an article posted earlier this week, but Jay Bruce is putting himself in position to be one of the top 5 contenders for the NL MVP this year. After today's 2 doubles and HR, Jay sits 2nd in the league in HR, 2nd in RBI, 6th in 2B, 4th in SLG, and 9th in OPS. Remember how white-hot Ryan Ludwick was a few weeks back? Well, entering today, Ludwick had the 4th highest OPS in the league since the All-Star break...and after today's game, Bruce now has a higher season OPS (.894) than Luddy (.892).

Seeing as it was a mid-week day game, nobody went overboard on gaseous humor or beer-induced diatribes, but there was solid contribution from Excalib8, CommiePuddin, ChesterDrawers, and Unmitigated Audacity. SunnyD was around and sunny, too, as was Charlie Scrabbles.

By the way, if Red Reporter had an "Employee of the Month" award, I'm pretty certain that nobody in the history of ever would've won it besides Charlie Scrabbles. Give that guy a high-five when you see him. 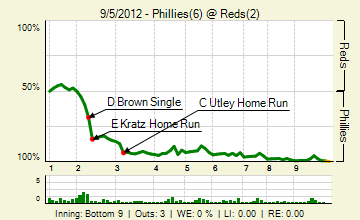