The two baby-faced whippersnappers on the Reds squad led the way tonight. Latos wasn't dominant, but he was very effective in his 7 IP, striking out 6 while walking 2 (both of which directly led to the run, but oh well) while tossing an even 100 pitches. 12-4, sub 3.70 ERA, 160 strikeouts, and getting better as the season goes on; that's exactly what Dr. Walt ordered in the offseason (along with an arsenal of short sleeved button-down shirts).

Bruce, on the other hand, was dominant...again. He's on one of his hot streaks, and for the first time in his life, he's doing it while there's no Joey Votto in the lineup. With Ryan Ludwick moderately cooling off (at least in the power department), Jay has put the offense on his back. He was 2 for 3 tonight with a walk, single, and his 31st discount double-check of the season. He's got his season OPS up to a would-be career high (.878), too.

Props to Ryan Hanigan, who, as he is wont, casually went 2 for 3. Drew Stubbs also had a vintage night in the eyes of the eternal Drew Stubbs' Optimist, going 1 for 3 with a walk and a mere 2 Ks. If he could do that every night, dang...nevermind, he can't. That's Austin Jackson.

Here seems like a solid spot to give some due dap to our Farmer's Only brethren. -ManBearPig, UncleWeez, and the esteemed BK bust their butts to bring us an in depth look at the future of our team, all the while doing it with an edge that makes us smile. Actually, I'm pretty convinced they could read us the Paula Deen cookbook at 8 AM every morning and make us fall over laughing, but the fact they write about the promising portion of the 2014-2015 editions of Red Reporter game threads makes it all the more worthwhile.

Props, guys. Now, if only there were a few west coast games left so I could pawn late recaps upon you. Dang. 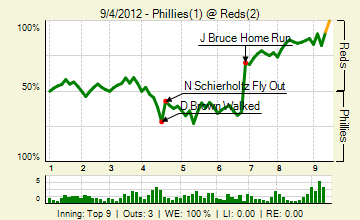