Anti-Baseball: Homer Bailey Accomplishes Nothing, Everything

No Hitters may be special, but they are also kind of stupid, from a sporting standpoint. And after the last decade, they're the sort of thing that makes baseball fun.

Share All sharing options for: Anti-Baseball: Homer Bailey Accomplishes Nothing, Everything

Rooting for a no-hitter is rooting for nothing to happen. It is to cheer for the absence of things. It makes us all essentially trolls of the non-baseball fans. "Cy, what do you hope happens in that big game tomorrow? Lots of exciting stuff in that baseball game, right?" "No. I hope it's over quickly and that nothing happens."

Or, put another way, a no-hitter is some sort of Andy Kaufman anti-joke on the Abbott and Costello routine:

"Nobody. And nobody ever will be."

But it's still a thrilling bit of sports theater, and it couldn't have come with a better protagonist. Reds fans of my age grew up with Homer, to an extent. He is fourteen months older than me and marked a break in Reds tradition. The 2003 draft was Bowden's last. Ryan Wagner was their 1st round pick and Chris Dickerson is the only one from that class to come away with positive career WAR. From 2004 onwards, things have been different. Kyle Lotzkar is the only first round draftee from 2004-2010 to not make his MLB debut. And I've always liked Bailey besides, with his bow-hunting, with his full-body "CAZADOR" tattoo he's almost too stereotypically Texas. With his love of books and sardonic, self-deprecating, and terse humor, he's almost too much like me.

It's probably too much of a coincidence to say Bailey has been part of the resurgent Reds, but the only players who've been in the organization longer than him are Votto and Hanigan. So it was very nice to see the three of them celebrate together in one of the best shots of the night: 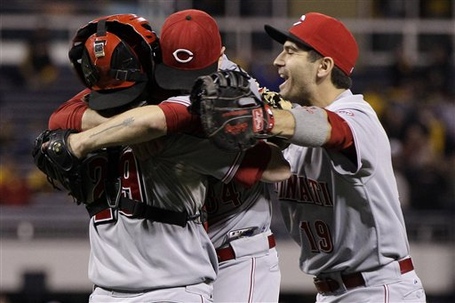 Pitchers are often compared to painters, and it's easy to see why: most of them are terrible. Even great pitchers all have their own routine and their own way of finding success. There are no two pitchers who are precisely alike, though trends come and go and geographic regions produce their own. The Reds currently have five starting pitchers who are all finding success in different parts of their careers and using wildly different methods to reach eerily similar results. It is very much a movement, much like painters. I especially like this analogy because it means Ryan Hanigan is some sort of Paris salonierre, hosting and guiding these mercurial talents in his own way and huffing a pipe and charming young women while doing so.

Homer Bailey is now an artist. He'll be at worst a trivia question and at best a legend going forward, but most likely somewhere in the middle: he'll pitch for three more years in Cincinnati, get a great free-agent contract, and retire in 10-12 years on a nice set of land with a nice library. He'll be brought up to the Ohio River for anniversaries and celebrations and otherwise just kind of do his thing. But he is part of history now, and part of how we'll remember the story of the 2012 Reds.

It's fitting that it's Homer with the no-hitter. It's fitting that it's the terse, mercurial, phoenom who gets accolades for a quick, lucky, and touted objective. The monochromia of a no-hitter suits the classical profile of Old Hoss. One could've watched last night's achievement in sepiatone or in a blinking black-and-white and not have noticed the difference for the most part. But Bailey's goofy arrow tattoo and fancy mix of fastballs belie his dour demeanor and trust in his catcher: he is doing a very new thing while he takes part in a tradition that dates back to Bumpus Jones.

Mark Rothko is famous for being an abstract painter, but he never considered himself abstract. He learned under the expressionist Gorky and the Cubist/Futurist Max Weber, and began his career in their style, much like Bailey began his career wanting to be like Clemens (who, if he didn't commit suicide, may as well have) and JR Richard. But Rothko soon realized that their style was too avante-garde -- too of the age -- to work with what he really wanted to do. Rothko wanted to explore mythology and the discovery of new worlds. He didn't think his teachers would leave him capable:

I quarrel with surrealists and abstract art only as one quarrels with his father and mother; recognizing the inevitability and function of my roots, but insistent upon my dissent.

The paintings Rothko would become known for are ridiculed by many non-artists for their simplicity. It's just broad swathes of color. What's the big deal? 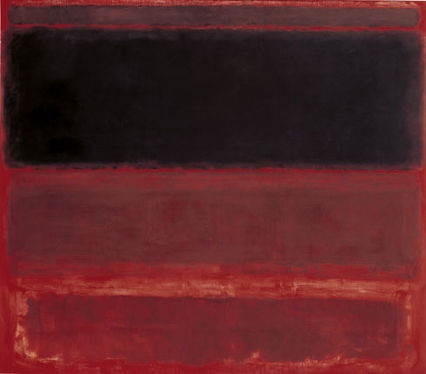 It's not about the colors, its about what the colors represent. No different from the no-hitter: it's not about the zeroes, it is about what the zeroes represent. Colors can do what forms cannot, they can tap into the viewer's emotions without relying on words or even coherent thoughts. With a deep breath and a clear mind, the viewer can understand the greatness she is experiencing, even if she cannot put it into words.

I am only in expressing basic human emotions — tragedy, ecstasy, doom, and so on....And if you, as you say, are moved only by their color relationship, then you miss the point.

But at least last night, Homer Bailey re-touched a tangent with Marcus Yakovlevitch Rothkowitz. Both changed their names to a mockery of their profession: David DeWitt gave himself the worst name for a pitcher, Mark Rothko attempted to de-Jewify himself in 1940 as if that would ever work for a Russian-accented chederchik. Homer Bailey is becoming the avatar of my personal present while Rothko was the avatar of my distant past: he was born in Daugavpils about a decade after my great-grandfather, and remains the most famous son of that city, a city that lost 83% of its population from 1890-1910. And if you thought the other two coincidences weren't stupid enough, Homer's hometown of La Grange is precisely 100 miles from the Rothko Chapel in Houston.

Coincidences and dumb luck, sure. But in a game where you strike out 10, you need five coincidences or dumb lucks to get a no-hitter (assuming a standard BABIP of .300). Bailey got them all to be historic, and not a few thanks to his erstwhile companions Joey and Ryan. It takes a lot to see the beauty in zeroes, but we all certainly did last night. Unable to explain it to friends, lovers, and colleagues, we'll just have to hang up the binary beauty in the galleries of our minds. Celebrate the coincidences and the randomness that have been so kind as to give us beauty. We'll miss them when they're gone.