The Reds, quiet all day, struck for 2 runs with 2 outs in the bottom of the 9th inning off of Brewers closer John Axford...a former Reds draft pick.

Dioner Navarro gets the nod today for his game-winning triple in the bottom of the 9th. Navarro battled John Axford to a full count (including a few moon-shot foul balls), and finished off his at bat and the Brewers with a gap shot to right-center that scored Jay Bruce from first. Navarro has proven a valuable asset as a LH bat and timeshare catcher with Ryan Hanigan, and as today's performance by Mat Latos shows, he's become much more comfortable with calling games for this staff. I fully expect him to play well while a member of the Reds' playoff roster.

Latos, as I mentioned, was awesome again today, allowing only a solo HR to Carlos Gomez-Mitchell is Batflipman while cruising through 7 innings on only 89 pitches (exactly the kind of start he should get as we head to the playoffs). Latos fanned 3, walked one, and allowed only 3 hits on his day, lowering his season ERA to a smile-inducing 3.52.

Todd Frazier also deserves a mention for his 19th HR of the season. With 2 outs in the 9th, the Reds had mustered a mere 3 singles on the day, but Frazier crushed an Axford fastball way out to CF for his first wanker since August 21st. Here's to hoping it's just the first of many. 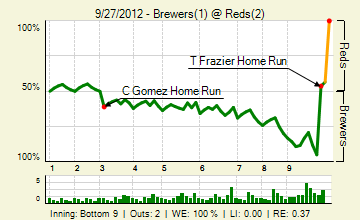