In Praise of the Counter-Revolution

There are thirteen new general managers since Walt Jocketty took over the Reds. The division standings have run red with their blood.

Share All sharing options for: In Praise of the Counter-Revolution

It was surprising to me to find that out, too. Seems like Jocko's been here forever, but in fact he's in the middle of the pack. I have no idea how to embed charts, so instead you may find the list here.

What also surprised me is a look at who has been successful. If the playoffs started today (which honestly wouldn't be soon enough), the GMs would be:

Jocketty's clearly the elder statesman, but Sabean, Beane, and Cashman are the oldest hands (along with Dan O'Dowd, they've been GM of the same team since the last millennium). There's obviously some other factors here: nobody fires a successful GM but everyone hires successful GMs. Baseball is an incredibly risk-averse atmosphere. Alliterative D's apparently give you job security. But with one measly Texan exception, all of these GMs are not the hot-shot young guns. Anthopolous, Zduriencik, Hoyer, and Byrnes have not won anything worth keeping paper down with, let alone all of the failed hair-gelled minions. The SABR revolution has passed, and the old guard about which Eastwood makes movies have persevered.
Frenchmen your parents' age made posters about such things. 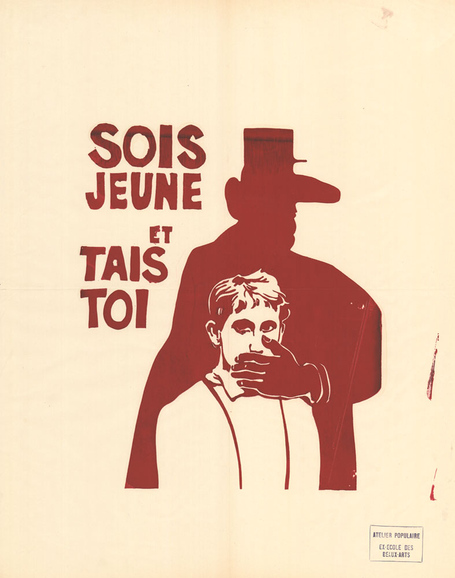 For those that don't read: "Be young and shut up."

I think a tremendous reason for this is that the statistical playing field has plateaud. WAR, WPA+, wOBA, and wRC+ simply are not going to tell you much more than a triple slash line and a decade of baseball knowledge. Things were different before skills like on-base were re-discovered, and things will be different once defense can be properly statistisized. But there aren't many more secrets out there.
Jon Daniels squeezed perhaps the last inefficiency out when he traded Texiera for (deep breath) Neftali Feliz, Matt Harrison, Elvis Andrus, Beau Jones, and Jarrod Saltalamacchia in 2007. He was able to trade ripening talent for cost-controlled youngsters. Nowadays, no such thing is happening. The nearest equivalent I could find was the Angels' trade for Zack Greinke. What did they give up? A shortstop and two AA starters.
Baseball is collectively getting smarter, and the smartest ones have always risen to the top. Jocketty is anti-SABR and proud, and the Reds are the better for it. Dan Duquette managed to get his team kicked out of South Korea and has a closer with a K/9 of 5.5, but look how that worked out. Maybe, its unfortunate to say, Malcom Gladwell was on to something and hours of practice really do make perfect. Maybe building a championship-caliber team is actually a bit like building a bomb, and if you can do it successfully for a few years, you're probably on to something.
It kills me to write these words. You all know me, I'm an anarchist Trotskyite who wants to put the ice pick in the other heads this time around. There is something a bit disappointing in seeing the grey leading the blind, true. Most of us, I recall, were begrudgingly accepting at best when Jocketty was named GM. Nobody was celebrating on the streets when Louis XVIII took the throne after Bonaparte.
But it's worked. The Reds have a solid team in the tradition of solid teams: defense up the middle, power at the corners, steady starters and a bullpen that can appendicitis even the best Houdinis. In the playoffs, they'll face more of the same. The new boss looks an awful lot like the old boss.
The blood of the young is in the streets. None of the Ivy League economists' mathematical models had their insurrection failing. Beane stayed silent during the Peasant's War (which I'm calling the "Adam Dunn doesn't like baseball" era) like Luther before him, and time will tell if Daniels is John of Leiden or John Calvin in this analogy that's getting as tortured as the former and not as resolute as the latter. The Counter-SABR-Revolution of old hands has come with a terrible swift sword and the young are bleeding and crying and they now know for whom the bell tolls.
The hitting king is dead. Long live the walking king.