Reds pitching allowed things to get loud while their bats went silent. Let's hope that's quickly getting out of their system.

Share All sharing options for: Sooo, Notroyo for Not-Game 2 Start? I'm On Board with It. Reds Lose to Brewers, 8-1.

The Joe Nuxhall Memorial Honorary Star(s) of the Game

The lineup's virtual "MVP/GG" and literal "MVP/GG" both paced the offense tonight, as Zack Cozart went 2 for 3 with a walk and the sole run scored and lineup-rock Joey Votto reached base all 4 times with 2 walks, a single, and his 42nd double of the season. Aside from that, the pitching gave up 8 runs and the remainder of the lineup went 2 for 27 with one walk and 8 strikeouts. That's pretty awful, folks. 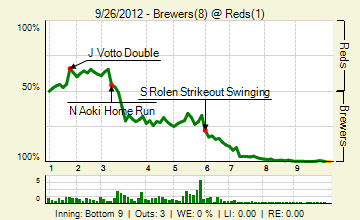