Cueto's 19th win of the season puts the Reds in a standings tie with the Nationals for the best record in the National League. Here's to hoping Dusty Baker returns soon to be the tiebreaker.

Johnny Cueto effectively knocked the Brewers out of the Wild Card race tonight, throwing 7 strong innings of 2 ER, 5 H, 0 BB, 5 K ball. For the better part of 4 weeks, Cueto struggled more than we'd ever seen, but he's righted the ship in his last two starts while yielding only 2 ER and 10 hits over 13 combined innings. The Cy Young Award is a fickle one, for sure, and we have no way of really knowing which way voters will turn in this year especially, but the fact remains that Cueto seems to be re-finding his awesomenessitude just in time for the postseason. That bodes well for all of us.

Honorable mention is rightfully due to Dioner Navarro, who went 2 for 3 with a crucial 2 RBI single. Walt Jocketty has made numerous moves over the last year and a half to make this team what it is today, many of which were high profile and required much risk; that said, he's made several under the radar moves that have paid off in spades, one of which is Navarro's pickup on a minor league deal. Granted, Dioner had struggled since making the All-Star team for the Rays in 2008, but he's a switch hitting catcher who provides solid defense, and Walt effectively hedged his Latos deal bets with Navarro, and he's filled in for the struggling Devin Mesoraco quite effectively. Well done, Walter.

An additional mention is more than deserved for our Blogger-in-Chief RijoSaboCaseyWKRP. As you all can see, the move to the new format that SB Nation United prompted is a large one, and it's one that took no small undertaking. 'KRP has been asked to do a hell of a lot in this process, and he deserves some serious props for it. Many of you (myself included) have been a bit skeptical of the whole process, but the fact is the new system allows for a lot of new things to be included, and they will be. 'KRP has been tasked with a lot of stuff lately, much of which is not what you'd typically expect a baseball blog manager to have to deal with...but he's dealt with it, and he's a better man than I for doing it. Props, boss. 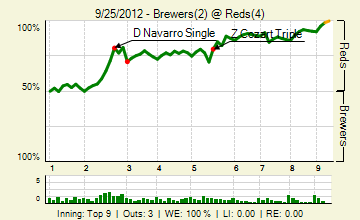