What's That? We Clinched Already, So This Didn't Matter? Rad. Reds Lose, 5-3.

Share All sharing options for: What's That? We Clinched Already, So This Didn't Matter? Rad. Reds Lose, 5-3.

Denis Phipps hit his first career HR tonight, a 2 run shot in the 8th that cut the Dodgers' lead to 2. Phipps is (and has been) an interesting case as a prospect in that he's old for his level, has been, and aside from a massive BABIP fueled AAA career has been largely irrelevant...but he's also a late-bloomer who is tremendously athletic and quite toolsy. Do I think he'll ever be a viable MLB player? No, I don't, but he's the exact kind of player that has enough potential to keep people interested.

He's a lot like Drew Stubbs, actually, though not tonight. Stubbs was 1 for 4 with 2 K's, and is currently in an epic battle with the .600 level on his season OPS. 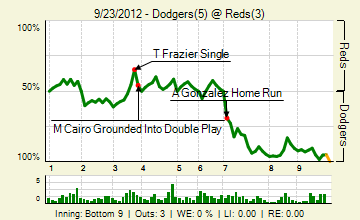