First and foremost, Red Reporters, if you happen to have a victory cigar, smoke 'em if ya got 'em.

The Joe Nuxhall Memorial Player of the Game

I'll get to Mat Latos and his dominant performance in a minute, trust me.

However, there's a guy out there that deserves this today and, truthfully, a lot more often than we really ever realized. That guy is Dusty Baker, and he gets the award today while being monitored in a Chicago hospital for an irregular heartbeat. Dusty has endured much, much more than his fair share of criticism in his 5 seasons at the helm of the Reds, but he has also ushered in a culture change that this franchise desperately needed. Chris Buckley rightfully gets credit for great draft classes and Walt Jocketty has proven to be quite shrewd while making trades and rifling through the bargain bin Free Agent market, but Dusty Baker has been the constant that has helped make the on field product work. Yes, he does things that make fans scratch their heads and yell at their televisions, but the key part of that fact that gets brutally under-emphasized is that his players don't have that same reaction. Batting Cozart, Stubbs, and Valdez at the top of the order seems like an obvious WTF moment for us, but the other members of the team have thrived under (and not complained about) those scenarios.

Why? Because Dusty has instilled in them a method that they believe in, and that method just won it's second NL Central title in 3 years.

Props, Dusty, and get well soon. Actually, I take that back...get well on your own terms, because you deserve it. Don't rush back, and don't try to do it too soon. You're our manager and you will be our manager, but your heart is your heart. We'll be here waiting to hug you when you're ready, but take your time and come back when you're ready.

As I mentioned earlier, today's game was started and dominated by Mat Latos, who threw 8 dominant innings in earning his 13th win. We got exactly who we wanted in the big offseason trade, folks. Don't believe me? Johnny Cueto, who is 22 months older than Latos, put up these numbers in his 2010 season. Hmm. Look familiar? Thought so. Hat tip to Jay Bruce and Brandon Phillips, both of whom hit monster solo dunkaroos. 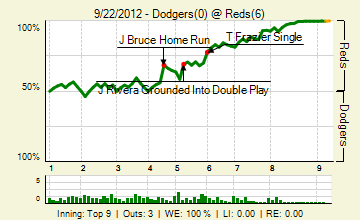